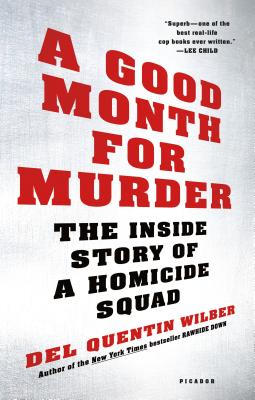 Twelve homicides, three police-involved shootings, and the furious hunt for an especially brutal killer—February 2013 was a good month for murder in suburban Washington, D.C.

"The book is briskly paced. . . . Wilber, a former Washington Post reporter, is painstaking in tracing how the detectives go about their fieldwork. The cat-and-mouse games they play with suspects in the interrogation room are fascinating." —The Washington Post

"Excellent . . . Mr. Wilber has a keen reporter's eye and ear for detail and a deft pen that sometimes skewers with funny yet unstinting prose the very detectives who granted him entrée to their world. . . . Wilber gets high marks for placing readers smack inside the world of his characters—in the stuffy, fluorescent-lit homicide offices, the bloody murder scenes, and the claustrophobic interview rooms as detectives cajole, intimidate, and banter with witnesses." —Pittsburgh Post-Gazette

"Wilber is a former veteran Baltimore Sun and Washington Post reporter who spent one cold February in 2013 tailing . . . this group of hardened but dedicated detectives, bent on justice but beset by impossible odds. It's like David Simon's The Wire—urgent but cold-eyed and tragic—and it's all true." —Men's Fitness

"With this engrossing and compelling account of the reality of crime and policing, Del Quentin Wilber affirms his place as one of the nation's most accomplished writers of first-rate narrative nonfiction. Put away your mysteries and thrillers—this is the real thing, rendered with grit and with grace." —Jon Meacham, author of American Lion and Destiny and Power