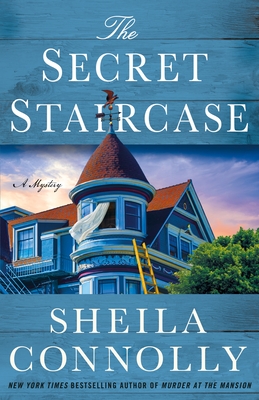 Kate Hamilton is feeling good about her plans to recreate Asheboro, Maryland as the Victorian town it once was. The town is finally on her side, and the finances are coming together. Even two recent murders aren't enough to discourage her: after she helped to solve them, she put them behind her.

Now comes the time to make real plans, and her first goal is to renovate the Barton Mansion on the outskirts of town. Luckily, it's been maintained in good condition in the century since the wealthy Henry Barton lived and died there. So the only substantial change she's planning is to update the original kitchen so that it can be used to cater events in the building. But when the contractor gets started, he discovers a staircase that had been walled in years earlier. And of course, given the way Kate's luck has been going, there's a body on the stairs.

After the first shock, Kate is relieved when the autopsy reveals that the man had died around 1880. Unfortunately, it also reveals that he had not died a natural death—he had been murdered. And the questions remain: who was he and what was he doing there?

So Kate and Carroll Peterson, who Kate had drafted to sort through Henry Barton's papers, start a hunt to identify the man and why he died at the Barton Mansion. But when a second body is found—this time from the present day—Kate realizes that someone may not be so keen on her digging up the past...

SHEILA CONNOLLY has published over thirty mysteries, including several New York Times bestsellers. Her series include the Orchard Mysteries, the Museum Mysteries, The County Cork Mysteries, and the newest, the Victorian Village Mysteries. She is a member of the Daughters of the American Revolution and the Society of Mayflower Descendants, and owns a cottage in West Cork. She lives in a too-big Victorian in southeastern Massachusetts with her husband and three cats.
or
Pre-Order Now
Copyright © 2020 American Booksellers Association