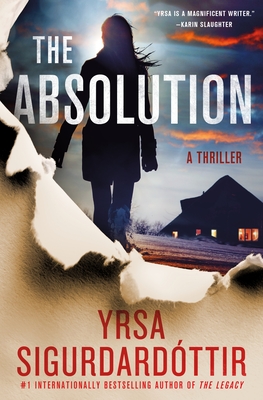 The Absolution is the third installment in Queen of Icelandic crime fiction Yrsa Sigurdardóttir’s series about the psychologist Freyja and the police officer Huldar.

The police find out about the crime the way everyone does: on Snapchat. The video shows a terrified young woman begging for forgiveness. When her body is found, it is marked with a number “2”.

Detective Huldar joins the investigation, bringing child psychologist Freyja on board to help question the murdered teenager's friends. Soon, they uncover that Stella was far from the angel people claim, but who could have hated her enough to kill?

Then another teenager goes missing, more clips are sent to social media, and the body with a “3” is found. Freyja and Huldar can agree on two things at least: the truth is far from simple. The killer is not done yet. And is there an undiscovered body carrying the number “1” out there?

YRSA SIGURDARDÓTTIR (pronounced UR-suh SIG-ur-dar-daughter) lives with her family in Reykjavík; she is also a director of one of Iceland's largest engineering firms. Her work is found on bestseller lists all over the world, and films are currently in production for several of her books. Her titles include, The Day is Dark and Ashes to Dust.

Praise For The Absolution: A Thriller (Children's House #3)…

A CrimeReads Most Anticipated Crime Book of 2020!

"Sigurdardóttir is masterful at blending examinations of complex social ills with satisfying procedural details, and this episode proves to be a compassionate, timely bar-raiser in a fine series." - Booklist

"Sigurdardottir creates an intense focus upon and thorough examination of bullying, including issues of isolation, suicide, counseling, and inept prevention in this excellent, gritty thriller that will appeal to series fans of Kimberly McCreight's Reconstructing Amelia." - Library Journal