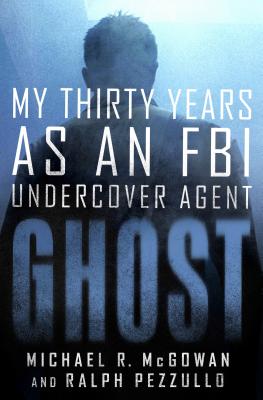 My Thirty Years as an FBI Undercover Agent

The explosive memoir of an FBI field operative who has worked more undercover cases than anyone in history.

Within FBI field operative circles, groups of people known as “Special” by their titles alone, Michael R. McGowan is an outlier. 10% of FBI Special Agents are trained and certified to work undercover. A quarter of those agents have worked more than one undercover assignment in their careers. And of those, less than 10% of them have been involved in more than five undercover cases. Over the course of his career, McGowan has worked more than 50 undercover cases.

In this extraordinary and unprecedented book, McGowan will take readers through some of his biggest cases, from international drug busts, to the Russian and Italian mobs, to biker gangs and contract killers, to corrupt unions and SWAT work. Ghost is an unparalleled view into how the FBI, through the courage of its undercover Special Agents, nails the bad guys. McGowan infiltrates groups at home and abroad, assembles teams to create the myths he lives, concocts fake businesses, coordinates the busts, and helps carry out the arrests. Along the way, we meet his partners and colleagues at the FBI, who pull together for everything from bank jobs to the Boston Marathon bombing case, mafia dons, and, perhaps most significantly, El Chapo himself and his Sinaloa Cartel.

Ghost is the ultimate insider's account of one of the most iconic institutions of American government, and a testament to the incredible work of the FBI.


Praise For Ghost: My Thirty Years as an FBI Undercover Agent…

"Propulsive....Will appeal to readers curious about the undercover lifestyle and the inner workings of federal law enforcement." —Kirkus Reviews

“Michael McGowan and Ralph Pezzullo’s brilliant and unflinching account of Mr. McGowan’s career as an undercover FBI Special Agent takes you into the soul of this unsung American hero, and into the strip clubs, and hotel suites where he outwitted the world’s top criminals—including three Italian Mafia families, the Russian Mob, and El Chapo Guzman and the Sinaloa Cartel. Ghost is absolutely riveting. I couldn’t put it down.” —Don Mann, longtime member of SEAL Team 6 and New York Times bestselling author.

"An excellent look into the murky world of Undercover. McGowan proves to be one of the top UCAs in the FBI. A must read." —Joseph Pistone, aka Donnie Brasco

"Few Agents in the history of the FBI have exposed themselves to more risk and performed with equal professionalism and integrity as Mike McGowan. His story shows the FBI's success isn't based on a system but the extraordinary efforts of individual Agents who find a way to make their cases despite all obstacles. Sometimes, as Mike discovered, the bad guys you are targeting aren't your only adversary.” —Michael German, retired FBI agent and author of Thinking Like a Terrorist: Insights of a Former FBI UCA

MICHAEL R. MCGOWAN is a 35–year law enforcement veteran, having first served as a police officer before joining the FBI more than 30 years ago. He has spent the past 30 years working domestic and international undercover operations. He has been recognized at the highest levels for his undercover assignments. He lives in New England.

RALPH PEZZULLO is a New York Times bestselling author and award-winning playwright, screenwriter and journalist. His books include Jawbreaker, Inside SEAL Team Six and others. He lives in California.
Loading...
or
Not Currently Available for Direct Purchase