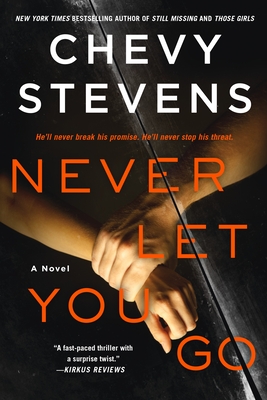 1. What do you think Sophie’s motivations were in writing to her father while he was in prison, despite what he had done to their family? Can you understand why she chose not to tell her mother about their communication?

2. Reflect on the structure of the novel. How did the alternating timelines of past and present affect your experience as a reader?

3. In the real world, there is often a stigma against women with abusive husbands, and many are thought of as paranoid or irrational. How can you see this stigma at play in Never Let You Go? What do you think we can do to combat it?

4. As readers, we get the perspective of both Sophie and her mother, Lindsay. Compare and contrast the two perspectives. Did you notice any major differences in the way that they reacted to their situation? Why do you think those differences exist?

5. On page 166, Sophie is with her father and thinks, “Maybe I can understand why my mom loved him.” Why does she just come to this realization now, and what do you think she means by this? Can you see why Lindsay might have fallen in love with Andrew?

6. Throughout the novel, Lindsay is suspicious of Jared and his motivations. As a reader, did you feel the same way? What did you think about Jared’s behavior, from looking up Sophie’s dad on the internet to calling Lindsay by her first name?

7. Do you think that Andrew really did change after his time in prison? Why or why not? What could you see in his behavior that leads you to this opinion?

8. Both Sophie and Lindsay feel the effects of the class divide between their family and Jared’s. Have you ever been in a situation where you felt that your relationship with someone else was affected by a difference in class? How did you deal with the situation?

9. At one point in the novel, Sophie compares her situation to the Butterfly Effect, which is the theory that small actions can have much larger effects. What do you think she means by this? Do you think it’s a good comparison?

10. What do you think the future holds for Lindsay? Do you think she will be able to build trust with anyone again after her experiences with Marcus and Andrew?