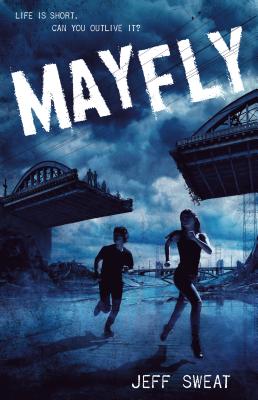 A futuristic thriller that pits teens against teens.

Jemma has spent her life scavenging tools and supplies in her tribe's small enclave outside what used to be a big city. Now she’s a teen, and old enough to become a Mama. Making babies is how her people survive—in Jemma’s world, life ends at age seventeen.

Survival has eclipsed love ever since the Parents died of a mysterious plague. But Jemma’s connection to a boy named Apple is stronger than her duty as a Mama. Forced to leave, Jemma and Apple are joined in exile by a mysterious boy who claims to know what is causing them to die. The world is crumbling around them, and their time is running out. Life is short. Can they outlive it?

"Mayfly is The Hunger Games meets Lord of the Flies, yet it is so much more. It’s smart, with an exploration of how myths and legends are created from clues of the past. Exploring these references with teens is a fascinating way to examine our own legends, myths and understanding of history. This is a stunning example of how we can use stories to teach teens about culture, society, history and more, in ways that spark creativity and imagination."--SheReads.com

"Lives are short and brutal in this postapocalyptic adventure, in which communities of children fend for themselves in the ruins of Los Angeles, generations after a disease wiped out all adults. ...When circumstances force 15-year-old Jemma; her best friend, Lady; the handsome Apple; and the brilliant Pico to leave the safety of the Holy Wood, they see it as an opportunity to seek out a rumored cure for the Ending, so they set off on a quest across a world filled with the remnants of the Parents’ civilization. ... There’s an almost mythological quality to this tale, as the resourceful protagonists maneuver through a barely recognizable landscape, with modern culture filtered through generations of oral history and misinterpretation, and debut novelist Sweat does an admirable job of maintaining the tense atmosphere and underlying desperation."--Publishers Weekly

"Amidst the zombielike Last Lifers, the cannibal Palos, and the prowling coyotes, Jemma, her best friend Lady, Apple, and Exile Pico seek out the secret to living longer than 17—but is longer life in this world even worth it? The landscape of Ell Aye and the language of the Angelenos adds an interesting layer to this debut: the characters speak in slang, which makes it easy to get drawn into this dystopian future. Accessible for a wide range of teen readers."-- Booklist