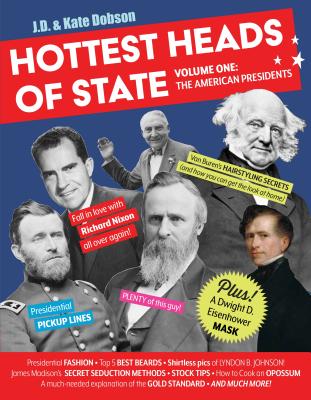 Volume One: The American Presidents

TigerBeat for U.S. presidents—a tour of our nation’s history through its irresistible commanders-in-chief

Is there anything hotter than former U.S. presidents? Obviously, there is not. And yet, until now, there was no way to learn about these handsome and mysterious men that is funny, educational, and includes thoughtful analysis of which ones would make good boyfriends. Thankfully, Hottest Heads of State fills this void. Get to know each president intimately with an individual profile outlining his particular charms (or, in some cases, “charms”). Plus, inside you’ll find:

· GAMES including “Match the Mistress to her POTUS”
· QUIZZES like “Which President has a Secret Crush on You?” and “Can You Cover Up Watergate?”
· that POSTER of Rutherford B. Hayes you’ve always secretly wanted!

J. D. and Kate Dobson’s wickedly smart and refreshingly bipartisan debut is a spot-on parody of a teen magazine featuring such unlikely heartthrobs as Richard Nixon and William H. Taft. In the end, you’ll learn centuries’ worth of cocktail party-worthy trivia, and you’ll be slightly more prepared to take the AP U.S. History exam. You’ll also start tingling whenever you hear the name Herbert Hoover.


Praise For Hottest Heads of State: Volume One: The American Presidents…

“A near perfect nexus of political reporting, history, and hirsute hotness. I knew a classic was born reading the words, ‘You probably thought to yourself, ‘Boy, I’d like to be in a Grover Cleveland sandwich.’’” —Berkeley Breathed, Pulitzer-winning creator of “Bloom County”

“Combining biting satire with gleeful absurdity, this is a relentlessly funny, bipartisan exploration of America’s presidents that judges each as a potential partner.”—BookPage

"It's hilarious, but also surprisingly informative. If you ever need a crash course in the gold standard written à la Buzzfeed, the Dobsons are at your service."—RiverfrontTimes

Kate Dobson is a former assistant comics editor for the Washington Post and head writer for Brown University’s humor magazine. These days, when she's not writing, she enjoys serving food to her small children and, later, vacuuming that same food up off the floor.
Loading...
or
Not Currently Available for Direct Purchase