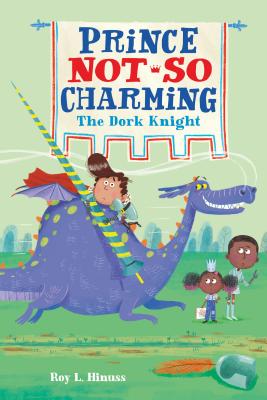 The third chapter book in the Prince Not-So Charming series features Prince Carlos figuring out how to be charming even when locked in mortal combat.

Prince Carlos Charles Charming has a secret: He’d much rather tell jokes than be a prince. But when you’re the heir to Faraway Kingdom, you don’t always get what you want.

Which is why Carlos has to learn how to joust.

Carlos is surprisingly great at jousting, from spearing haystacks to smashing watermelons. But when a tournament rolls around, suddenly Carlos realizes he has to actually point his lance at other people—and they’ll point theirs back!

Perfect for middle grade readers and filled with adorable illustrations, Prince Not-So Charming: The Dork Knight shows it’s hard to live up to the fairy tale—and that the best way to win a contest can be embracing your own dorkiness.

Roy L. Hinuss is the authorized biographer of the Charming Royal family. He is also fond of the occasional fart joke. When he isn’t writing about Prince Carlos Charles Charming’s many adventures, he can be found in his basement laboratory making batches of homemade Brussels sprout ice cream.