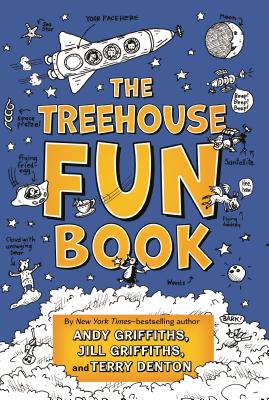 Together Andy, Terry and Jill (and Silky!) have lots of fun and crazy adventures in the coolest treehouse in the world. Then, Andy and Terry write books about them.

And in THIS book, they want YOU to join in.

Decode secret messages! Connect the dots! Create your own stories and drawings about spaceships, pizza and zany inventions! All of these fun activities and SO MUCH MORE await. Well, what are you waiting for? Come on up!

Fans of the beloved Treehouse Books series will delight in using their imaginations to step inside their own treehouses in this entertaining activity book from New York Times-bestselling author Andy Griffiths.

Jill Griffiths is Andy Griffiths's wife, and his first and closest editor.
Loading...
or support indie stores by buying on