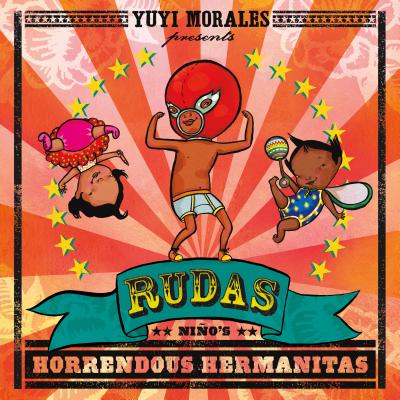 In this picture book, a companion to the Pura Belpré Medalist Niño Wrestles the World, Niño's little sisters get in on the wrestling action.

No opponent is too big a challenge for the cunning skills of Las Hermanitas, Lucha Queens! Their Poopy Bomb Blowout will knock em' down! Their Tag-Team Teething will gnaw opponents down to a pulp! Their Pampered Plunder Diversion will fell even the most determined competitor!

But what happens when Niño comes after them with a move of his own? Watch the tables turn in this wild, exciting wrestling adventure from Caldecott Honor author Yuyi Morales.

"The energy in Morales’s punchy artwork is dialed up to the max, and the finale demonstrates that a good book can pacify even the most ferocious of opponents." —Publishers Weekly, starred review

"With acrylics and inks Morales depicts the spectacular battle between Niño and his two little sisters in brilliantly colored cartoons, as each page blasts our senses with eye-popping bold font styles and bubble text, and backgrounds of explosive stars. Another hit for award winner Morales!" —Booklist, starred review

"Another winner by Morales, this ode to sibling scuffles and makeups will delight kids of all ages. ¡Vivan las hermanitas!" —School Library Journal, starred review

"This follow-up to Niño Wrestles the World (rev. 7/13) is brimming with action,humor, and heart." —The Horn Book, starred review