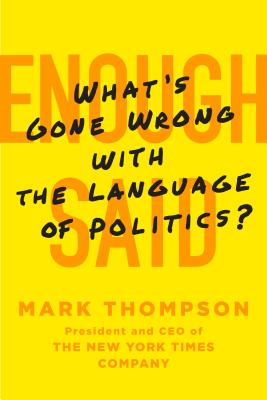 What's Gone Wrong with the Language of Politics?

There’s a crisis of trust in politics across the western world. Public anger is rising and faith in conventional political leaders and parties is falling. Anti-politics, and the anti-politicians, have arrived. In Enough Said, President and CEO of The New York Times Company Mark Thompson argues that one of the most significant causes of the crisis is the way our public language has changed.

Enough Said tells the story of how we got from the language of FDR and Churchill to that of Donald Trump. It forensically examines the public language we’ve been left with: compressed, immediate, sometimes brilliantly impactful, but robbed of most of its explanatory power. It studies the rhetoric of western leaders from Reagan and Thatcher to Berlesconi, Blair, and today’s political elites on both sides of the Atlantic. And it charts how a changing public language has interacted with real world events – Iraq, the financial crash, the UK's surprising Brexit from the EU, immigration – and led to a mutual breakdown of trust between politicians and journalists, to leave ordinary citizens suspicious, bitter, and increasingly unwilling to believe anybody.

Drawing from classical as well as contemporary examples and ranging across politics, business, science, technology, and the arts, Enough Said is a smart and shrewd look at the erosion of language by an author uniquely placed to measure its consequences.


Praise For Enough Said: What's Gone Wrong with the Language of Politics?…

"Thompson’s writing packs a high percentage of insights per page and his book manages to be an exemplary investigation, a history, an autopsy, a practical manual, and a cautionary tale all at once." --Publishers Weekly (starred review)

"Ranging masterfully from Aristotle and Pericles to the age of Trump and Twitter, Mark Thompson makes the case for political rhetoric as a democratic art. This vividly written, trenchant book is a much-needed antidote to the miasma of spin, incivility, and 'truthiness' that afflicts politics today." --Michael Sandel, New York Times bestselling author of Justice and What Money Can't Buy

"Enough Said displays many of the qualities that it identifies as lacking in our civic discourse. It is thoughtful, nuanced and wise; it considers opposing views; it takes ample note of history and is unafraid of complexity. To read this book is to feel there is cause, however tenuous, for hope.” –The Washington Post

“The public language of our dumbed-down democracy is brilliantly analyzed by Mark Thompson. Enough Said is such a lacerating—and entertaining—expose of the Untruth Society, the prolixity of ‘hateful, mad, duplicitous’ words, it is surprising and bracing that he is able to identify the moral sources of a simmering counter-revolution.” –Harold Evans, author of The American Century

"[An] important book...elegantly argued." --The Guardian

MARK THOMPSON has been the President and CEO of The New York Times Company since 2012. Previously, he was Director-General of the BBC from 2004-2012, and CEO of Channel 4 Television Corporation from 2002-2004. Born in London, Thompson attended Stonyhurst College and Merton College Oxford. Thompson has three children with his wife, writer Jane Blumberg.
Loading...
or
Not Currently Available for Direct Purchase