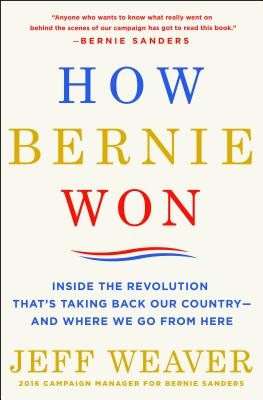 The brilliant manager of Bernie Sanders’s 2016 presidential campaign shows how Bernie took on the entire establishment and changed modern American politics for good.

When Jeff Weaver hopped in a car with Bernie Sanders in the summer of 1986, he had no idea the Vermont backroads would lead them all the way to the 2016 presidential campaign.

In How Bernie Won, Weaver shows how Bernie sparked a movement that would sweep America and inspire millions. He vowed not to run a negative campaign. He would focus on policies, not personalities. He would not be beholden to big money. He would actually make America work for ordinary people. Weaver also shows how they overcame significant challenges: A media that thrived on negative campaigns. A party controlled by insiders. And a political system dependent on big money. Weaver explains how Bernie beat them all and, in doing so, went from having little national name recognition when he entered to the race to being one of the most respected and well-known people in the world by its end—because, Weaver argues, Bernie won the race.

He moved the discussion from the concerns of the 1% to those of the 99%. He forced the Democrats to remember their populist roots. And he showed that an outsider with real ideas and ways to get them done could compete and win against the establishment’s hand-picked candidate.

From holding bags of “Bernie buttons” and picket-stick signs, to managing thousands of campaign workers, to looking ahead to 2020, Weaver chronicles the birth of a revolution that didn’t end in November 2016. It’s only just begun.


Praise For How Bernie Won: Inside the Revolution That's Taking Back Our Country--and Where We Go from Here…

"Only Jeff Weaver could bring to life the story of the inner workings of the historic 2016 Democratic primary. Anyone who wants to know what really went on behind the scenes of our campaign has got to read this book. From an insurgent effort to the national mass movement it became, he was there with me at the heart of it." —Sen. Bernie Sanders, author of the New York Times bestseller Our Revolution

"Weaver’s book is, fundamentally, an account of a journey on an underdog campaign and the triumphs and mistakes therein. But his time with Sanders saw him move from managing a long-shot presidential bid to one of the most successful grassroots movements in political history." —The Daily Beast

"Weaver's book works equally well as a chronicle of the most full-throated progressive presidential campaigns in modern memory -- which singlehandedly turned "socialism" into a popular search term -- and as a call to arms for future activism." —Salon

"How Bernie Won is an insider’s view of a campaign that might have won the nomination if the Democratic Party’s primary rules hadn’t been stacked against challengers and its top-level personnel been determined to stop Mr. Sanders at nearly any cost." —The Wall Street Journal

JEFF WEAVER, who began working for Bernie Sanders in 1986, was his campaign manager for the 2016 presidential election, as well as president of Our Revolution, a nonprofit founded by Sanders until June 2017. He is currently senior political adviser to Senator Sanders. He graduated from the University of Vermont and Georgetown University Law School. He lives in Falls Church, Virginia.
Loading...
or
Not Currently Available for Direct Purchase