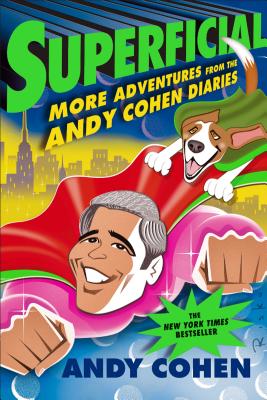 The megapopular host of Watch What Happens: Live and executive producer of The Real Housewives franchise is back, better than ever, and telling stories that will keep his publicist up at night.

Since the publication of his last book, Andy has toured the country with his sidekick Anderson Cooper, hit the radio waves with his own Sirius station, Radio Andy, appeared on Real Time with Bill Maher despite his mother’s conviction he was not intellectually prepared, hosted NBC’s Primetime New Year’s Eve special, guest edited Entertainment Weekly, starred in Bravo’s Then & Now with Andy Cohen, offended celebrities with his ongoing case of foot-in-mouth disease, and welcomed home Teresa “Namaste” Giudice, from a brief stint in jail. Hopping from the Hamptons to the Manhattan dating world, the dog park to the red carpet, Cardinals superfan and mama’s boy Andy Cohen, with Wacha in tow, is the kind of star that fans are dying to be friends with. This book gives them that chance.

If The Andy Cohen Diaries was deemed “the literary equivalent of a Fresca and tequila” by Jimmy Fallon, Superficial is a double: dishier, juicier, and friskier. In this account of his escapades—personal, professional, and behind-the-scenes—Andy tells us not only what goes down, but exactly what he thinks of it.


Praise For Superficial: More Adventures from the Andy Cohen Diaries…

"Andy Cohen isn't afraid to talk about anything in his life....the TV exec-turned-talk show host still manages to bring new meaning to the words "tell-all"....Superficial serves up an irresistible inside look at his glamorous, celebrity-packed life." —People

“His books are so funny, and he is one of the few authors who really make me laugh out loud.”—Anderson cooper, for Architectural Digest

"Remember that time you bought a pint of chocolate-chip ice cream, and you said you were just going to take a couple of bites, and then you ate the whole thing?...Yeah, that’s what reading Andy Cohen’s third book is like. It’s tasty and hard to put down"—Booklist

Andy Cohen is the author of several New York Times bestselling books, including Most Talkative and Superficial. He is the host and executive producer of Watch What Happens Live, Bravo's late night, interactive talk show. He also serves as executive producer of The Real Housewives franchise and hosts the network's highly rated reunion specials. He's won an Emmy and two Peabody Awards for his work, and he lives in New York City.
Loading...
or
Not Currently Available for Direct Purchase