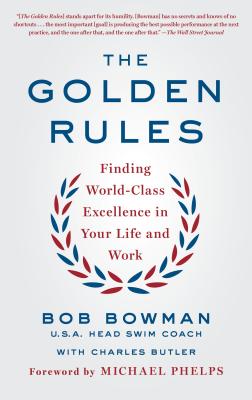 Finding World-Class Excellence in Your Life and Work

Bob Bowman, best known as the coach for the record-breaking run of Michael Phelps, is one of the most successful coaches in sports history. He is lauded for his intense personality, incredible dedication to his athletes, and his ability to nurture talent in athletes who have the heart and drive to win. This is his motivational book about winning in all walks of life and what you have to do to get there. He presents ten key concepts that all people should live by. Illuminating his lessons with spirited anecdotes, Bowman will teach you how to get gold out of every day by setting goals and getting motivated to achieve them. He will explain that taking risks is the key to success in any pursuit, and coach you on how you can become more risk-tolerant.

By following The Golden Rules, you will learn to visualize in order to achieve your goals, and that above all else, dedication to your training, your job, or whatever area it is you are seeking to triumph in is paramount for success.


Praise For The Golden Rules: Finding World-Class Excellence in Your Life and Work…

"[The Golden Rules] stands apart for its humility. [Bowman] has no secrets and knows of no shortcuts. Mostly he obsesses about simplicity. For Phelps and Bowman's other elite swimmers...the most important [goal] is producing the best possible performance at the next practice, and the one after that, and the one after that." — The Wall Street Journal

"[The Golden Rules] is [Bowman's] motivational book about winning in all walks of life and what you have to do to get there...illuminated by spirited anecdotes, Bowman will teach you how to get gold out of every day by setting goals and getting motivated to achieve them." — National USA Swimming Organization

"In The Golden Rules, Bowman details 10 steps to world-class excellence in life and work, illustrating them with lessons learned from coaching not only Michael Phelps, but also several more world-class swimmers and his own personal experiences." — NBCSports.com

"The Golden Rules is a book for all of us, for all who, like Bob Bowman and Michael Phelps, have a goal in mind and understand that it will not be easy to achieve. It will not come without adversity, it will come with no guarantees, it will require daily dedication, devotion and discipline. It will require change and adaptation during all life." — swimillustrated.pro

"Make room for a pride of place gem...This is a book for all and for all seasons" — Swimvortex.com

BOB BOWMAN is the longtime coach of 18-time Olympic gold medalist Michael Phelps. After serving as an assistant coach in three different Summer Olympics, Bowman will be the head coach of the U.S. men's swimming team at the 2016 Rio Olympics. He was also the U.S. men's head coach at the 2007, 2009 and 2013 FINA World Championships. Inducted into the International Swimming Hall of Fame in 2016, Bowman is currently the head swim coach at Arizona State University.

Charles Butler has written for The New York Times, Fortune, and Runner’s World, among other publications. With Matt Long, he is the author of The Long Run: A New York City Firefighter’s Triumphant Comeback from Crash Victim to Elite Athlete. He has taught journalism at Lehigh University, Ursinus College, and the University of Oregon and resides in Pennsylvania’s Lehigh Valley with his wife and two children.
Loading...
or
Not Currently Available for Direct Purchase