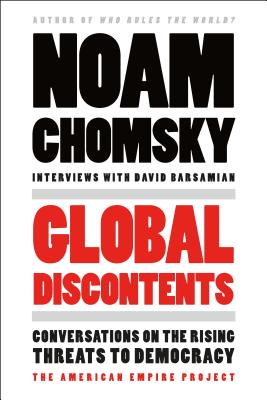 Conversations on the Rising Threats to Democracy (The American Empire Project)

In a compelling new set of interviews, Noam Chomsky identifies the “dry kindling” of discontent around the world that could soon catch fire.

In wide-ranging discussions with David Barsamian, his longtime interlocutor, Noam Chomsky asks us to consider “the world we are leaving to our grandchildren”: one imperiled by climate change and the growing potential for nuclear war. If the current system is incapable of dealing with these threats, he argues, it’s up to us to radically change it.

The twelve interviews in Global Discontents examine the latest developments around the globe: the rise of ISIS, the reach of state surveillance, growing anger over economic inequality, conflicts in the Middle East, and the presidency of Donald Trump. In personal reflections on his Philadelphia childhood, Chomsky also describes his own intellectual journey and the development of his uncompromising stance as America’s premier dissident intellectual.

Noam Chomsky is the author of numerous bestselling political works, including Hegemony or Survival and Failed States. A laureate professor at the University of Arizona and professor emeritus of linguistics and philosophy at MIT, he is widely credited with having revolutionized modern linguistics. He lives in Tuscon, Arizona.

David Barsamian, director of the award-winning and widely syndicated Alternative Radio, is a winner of the Lannan Foundation's Cultural Freedom Fellowship and the ACLU's Upton Sinclair Award for independent journalism. He lives in Boulder, Colorado. His interviews with Noam Chomsky have been published as books, including Imperial Ambitions and Global Discontents.
Loading...
or
Not Currently Available for Direct Purchase