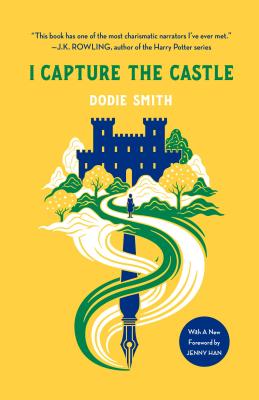 I Capture the Castle

“Every time I meet someone who also loves I Capture the Castle, I know we must be kindred spirits.” —from the new foreword by Jenny Han, the New York Times bestselling author of To All the Boys I’ve Loved Before.

A beautiful, deluxe edition of Dodie Smith’s beloved novel, I Capture the Castle, featuring a new foreword by New York Times bestselling author Jenny Han, a stunning new cover, and designed endpapers that is perfect for devoted readers and those discovering this timeless story for the first time.

Seventeen-year-old Cassandra Mortmain and her family may live in a ramshackle old English castle, but that’s about as romantic as her life gets. While her beautiful older sister, Rose, longs to live in a Jane Austen novel, Cassandra knows that meeting an eligible man to marry isn’t in either of their futures when their home is crumbling and they have to sell their furniture for food. So Cassandra instead strives to hone her writing skills in her journals. Until one day when their new landlords move in, which include two (very handsome) sons, and the lives of the Mortmain sisters change forever.

Through Cassandra’s sharply funny, yet poignant, journal entries, she chronicles the great changes that take place within the castle’s walls, and her own first descent into love. By the time she pens her final entry, she has “captured the castle” – and the heart of the reader – in one of literature’s most enchanting novels.

“This book has one of the most charismatic narrators I've ever met.” —J.K. Rowling, bestselling author of the Harry Potter series


Praise For I Capture the Castle: Deluxe Edition…

“This book has one of the most charismatic narrators I've ever met. Seventeen-year-old Cassandra Mortmain captures the castle in her insightful, witty journal entries.” —New York Times bestselling author, J. K. Rowling

“What a lovely book is I Capture the Castle. It's as fresh as if it were written this morning, and as classic as Jane Austen. I'm very happy to have met it.” —Donald E. Westlake

“A delicious, compulsively readable novel about young love and its vicissitudes. What fun!” —Erica Jong

Dorothy Gladys "Dodie" Smith, born in 1896 in Lancashire, England, was one of the most successful female dramatists of her generation. She wrote Autumn, Crocus, and Dear Octopus, among other plays. I Capture the Castle, her first novel, was written in the 1940s while she was living in America. An immediate success, it marked her crossover from playwright to novelist, and was produced as a play in 1954. Smith also wrote the novels The Town in Bloom, It Ends with Revelations, A Tale of Two Families, and The Girl in the Candle-Lit Bath, but she is best known today as the author of two highly popular stories for young readers: The Hundred and One Dalmatians and The Starlight Barking. She died in 1990.
Loading...
or support indie stores by buying on