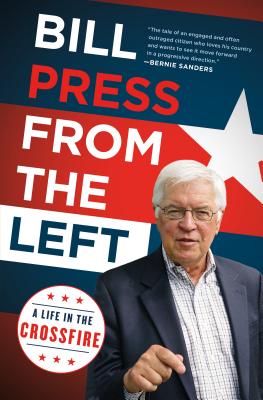 From the Left (Hardcover)

A Life in the Crossfire

"Bill Press has done it all. He was the Chair of the California Democratic Party, he has been involved in numerous campaigns, he has been a prolific writer, and has worked as a host and commentator on radio and TV. In other words, he knows politics inside and out. This is the tale of an engaged and often outraged citizen who loves his country and wants to see it move forward in a progressive direction." —Senator Bernie Sanders

But based on where he came from, it's a wonder he didn't end up a Trump voter. He grew up in a blue-collar family in a small town in Delaware south of the Mason-Dixon line, where segregation was the rule. As a Catholic, he was taught that abortion, divorce, sex outside of marriage, and homosexuality were morally wrong: beliefs later reinforced in ten years of seminary studies for the priesthood. He was on his way to be a rock-ribbed conservative.

So what went right for him that he swerved so far to the left?

In From the Left, Press shows this gradual transformation, starting with two years of studies in Europe and a providential escape to California. From Sacramento he made his way to Southern California television and talk radio as a political commentator and liberal talk show host. Jumping to Washington and national cable TV, Press hosted Crossfire and The Spin Room on CNN, and Buchanan and Press on MSNBC. A member of the White House Press Corps and columnist for Tribune Media Services and The Hill, Press was an early supporter of Bernie Sanders and hosted two of the Senator's first presidential strategy sessions in his living room.

If you're already on the left, you'll cheer a fellow traveler. If not yet there, you soon will be.

BILL PRESS is the host of the nationally syndicated radio program The Bill Press Show. He writes a syndicated column for Tribune Media Services, and is the former cohost of MSNBC’s Buchanan and Press and CNN’s Crossfire and The Spin Room.


Praise For From the Left: A Life in the Crossfire…

Advanced Praise for From the Left

“More than a memoir, more than political commentary and advocacy… Press writes eloquently in a conversational style evoking grandfatherly wisdom. From the Left is nostalgic without being sappy, instructional without being preachy, hopeful while acknowledging the immense challenges of the future. Above all, it is sincere. Greater than the sum of its parts, Press’ book should be of strong interest to any engaged citizen.” –Booklist

"In this breezy memoir Press, former cohost of CNN’s Crossfire and Spin Room, recounts the many hats he’s worn in his career, among them Catholic seminarian, environmental activist, political candidate, campaign director (including for Jerry Brown’s quixotic 1976 presidential bid), and journalist. Press reveals a knack for being in the right place at the right time...Press’s account of his life to date will instruct and provide encouragement to his fellow embattled progressives." –Publishers Weekly

"Bill Press has done it all. He was the Chair of the California Democratic Party, he has been involved in numerous campaigns, he has been a prolific writer, and has worked as a host and commentator on radio and TV. In other words, he knows politics inside and out. This is the tale of an engaged and often outraged citizen who loves his country and wants to see it move forward in a progressive direction." —Senator Bernie Sanders

"easy read, lively and well-written... Press proves it is possible to disagree agreeably." —The Hill

"For years I debated Bill Press on television. We argued, barked and threw nasty insults at each other. By the end, I loved him more. Bill Press is an amazing guy who has lived a remarkable life. From a Swiss seminary to the California governor’s mansion to the world of cable news, it’s all here. Buy this book. It’s as interesting as Bill is." —Tucker Carlson, Fox News

“For years, on radio and television, Bill Press has been one of the strongest progressive voices in the media. His story is an inspiration for all progressives in this country.” —Rep. Maxine Waters

“Bill Press has not only led an amazing life, he’s also done an amazing job fighting for progressive causes on CNN, MSNBC, and his own radio show. He makes us as Californians and Americans proud.” —House Democratic Leader Nancy Pelosi

“Bill Press is wrong about everything else. Maybe he can at least get the facts of his life right.” —Ann Coulter, bestselling author

“Bill Press is the Zelig of politics. As you will see in this book, he’s everywhere - the California governor’s office, the Obama White House, Bernie Sanders' campaign, CNN and MSNBC. You have to run fast just to keep up with him.” —Anderson Cooper

"With his trademark wit, humor, and no-holds-barred style, Bill Press has done it again. From the Left tells the unlikely and riveting story of how a Catholic kid from the South ended up as one of our country’s iconic progressive voices. The future of the left depends on learning from our history—and Bill had a front row seat. This is a must-read." —Rep. Rosa DeLauro

"Bill Press made a splash in Sacramento and went on to become one of the more astute observers in our nation's capital. He has a real story to tell." —Gov. Jerry Brown

"Bill Press has written a refreshingly honest book. If you want to know what really happens in the media, it's a must read. We're so proud to have him as part of The Young Turks Network!" —Cenk Uygar

"For years, I've enjoyed debating the issues with Bill Press, a true progressive, and guess what? Because of his intellectual honesty, we often find ourselves agreeing." —Joe Scarborough

Praise for The Obama Hate Machine

“In a poisoned political climate, negative personal attacks on President Obama must have no place in our public discourse. In an age when sound bites too often dominate the news, Bill Press digs deeper: busting the myths, standing up for the truth and the American people.” —House Democratic Leader Nancy Pelosi

“Press’ tactics are straightforward… Liberals will love it” —Kirkus Reviews

“An unsettling glimpse into the unsavory side of corporate interests and an irresponsible media.” —Publishers Weekly