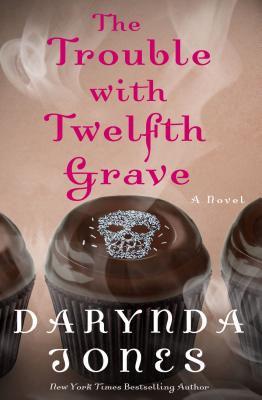 The Trouble with Twelfth Grave

Ever since Reyes Farrow escaped from a hell dimension in which Charley Davidson accidentally trapped him, the son of Satan has been brimstone-bent on destroying the world his heavenly Brother created. His volatile tendencies have put Charley in a bit of a pickle. But that’s not the only briny vegetable on her plate. While trying to domesticate the feral being that used to be her husband, she also has to deal with her everyday life of annoying all manner of beings—some corporeal, some not so much—as she struggles to right the wrongs of society. Only this time she’s not uncovering a murder. This time she’s covering one up.

Add to that her new occupation of keeping a startup PI venture—the indomitable mystery-solving team of Amber Kowalski and Quentin Rutherford—out of trouble and dealing with the Vatican’s inquiries into her beloved daughter, and Charley is on the brink of throwing in the towel and becoming a professional shopper. Or possibly a live mannequin. But when someone starts attacking humans who are sensitive to the supernatural world, Charley knows it’s time to let loose her razor sharp claws. Then again, her number one suspect is the dark entity she’s loved for centuries. So the question becomes: Can she tame the unruly beast before it destroys everything she’s worked so hard to protect?


Praise For The Trouble with Twelfth Grave: A Novel (Charley Davidson Series #12)…

“Sexy, sassy…Jones’s characters, both living and dead, are colorful and endearing.” —The Associated Press on First Grave on the Right

“Fourth Grave Beneath My Feet continues to blend paranormal, romance, and mystery better than any other contemporary work out there.”—Heroes and Heartbreakers

“Charley has such an endearing personality that you can't help but love her. All the side charactersare just as magnetic and lively as Charley, making for an all-around good time.”–Fresh Fiction on The Curse of Tenth Grave

“Charley Davidson is back and she is better than ever! Darynda Jones thrills and excites readers with the eleventh book in the Charley Davidson series.” –Fresh Fiction on Eleventh Grave in Moonlight