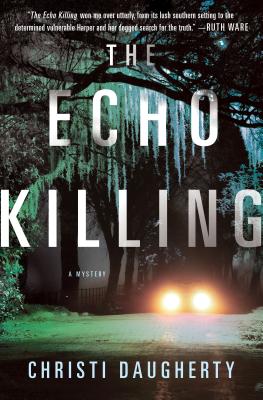 
Praise For The Echo Killing: A Mystery (A Harper McClain Mystery #1)…

“Daugherty uses her experience as a crime reporter to create a pulse-pounding combination of mystery and suspense that hints at a welcome follow-up.” - Kirkus Reviews

“…an engrossing, multifaceted mystery with snappy dialogue, a well-drawn cast of characters, and a sizzling romantic subplot.” - Publishers Weekly

“Well plotted and riveting, this introduction of Harper McClain is a must-read!” - RT Book Reviews

“Daugherty delivers an insider's view of journalism, from the adrenaline rush of covering a major story to the drudgery of delving into the background behind a story. She also nails the newsroom culture, from the humorous banter to the serious work, and shows how layoffs and cutbacks have affected the way journalists cover their community.” - Associated Press

“Eye-poppingly tense, imbued with journalistic authenticity from former crime reporter Daugherty and focused laser-like on her vivid creation of Harper, “The Echo Killing” cries out for a sequel.” - Richmond Times-Dispatch

"This taut, atmospheric thriller held me spellbound from the first page. I didn't want it to end!" - Linda Castillo, New York Times Bestselling Author of the Kate Burkholder series

"The Echo Killing won me over utterly, from its lush southern setting, to the determined, vulnerable Harper and her dogged search for the truth." - Ruth Ware, New York Times Bestselling Author of The Woman in Cabin 10

"A smart, tough, emotionally bruising portrayal of what murder means when it's up close and personal. A terrific book. Brava." - Carolyn Hart, New York Times Bestselling Author of the Death on Demand series

"The Echo Killing is a thriller that's excruciatingly suspenseful, drenched in memory, and has you biting your nails as each chapter unfolds." - Laura Childs, New York Times Bestselling Author of the Tea Shop Mysteries series

"I don't remember breathing the whole time I read The Echo Killing. Christi Daugherty has poured her own experience as a crime writer into a taut and authentic story of a brave but damaged woman." - Rhys Bowen, New York Times Bestselling Author of the Royal Spyness series

"Wrought with wonderfully alive characters and a protagonist who is both tough-minded and tender, this is a story that will have you reading late into the night." - Diane Les Becquets, author of Breaking Wild

"A taut, tightly-woven mystery set in the simmering heat of Savannah. This one kept me guessing till the very end . . . and then left me hungry for more! I can’t wait for Harper McLain’s next outing." - C. J. Tudor, author of The Chalk Man

As a newspaper reporter, Christi Daugherty covered her first murder at the age of 22. There would be many more over the subsequent years when she worked as a journalist in cities including Savannah, Baton Rouge, and New Orleans. Now a novelist, she lives in the south of England. She is the author of The Echo Killing and A Beautiful Corpse.
Loading...
or
Not Currently Available for Direct Purchase