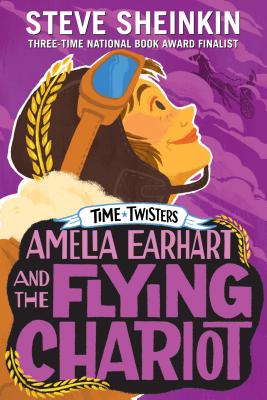 Siblings Abby and Doc have been racing through time to fix history after Abraham Lincoln, Abigail Adams, and Neil Armstrong started popping up in the wrong places, at the wrong times. When Amelia Earhart accidentally lands her plane in Ancient Greece, Abby and Doc partner with Kyniska, the first woman to win the Olympics, to get Amelia back on track to finish her first solo flight across the Atlantic.

Steve Sheinkin combines history, hilarity, and surprising twists in Amelia Earhart and the Flying Chariot. The Time Twisters series is a surefire hit with history buffs and reluctant readers alike!


Praise For Amelia Earhart and the Flying Chariot (Time Twisters)…

“If you want to have fun while simultaneously learning some truly valuable lessons about history, then you absolutely MUST read these books.” —Nick Bruel, New York Times–bestselling author of the Bad Kitty series

Steve Sheinkin is the acclaimed author of fast-paced, cinematic nonfiction histories, including Fallout, Undefeated, Born to Fly, The Port Chicago 50, and Bomb. His accolades include a Newbery Honor, three Boston Globe–Horn Book Awards, a Sibert Medal and Honor, and three National Book Award finalist honors. He lives in Saratoga Springs, New York, with his wife and two children. stevesheinkin.com