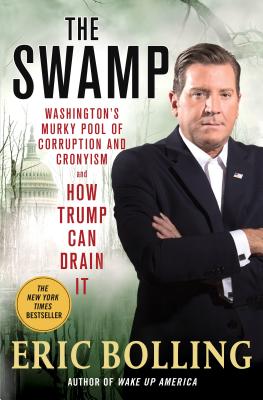 When Washington D.C. was first built, it was on top of a swamp that had to be drained. Donald Trump says it's time to drain it again.

In The Swamp, bestselling author Eric Bolling presents an infuriating, amusing, revealing, and outrageous history of American politics, past and present, Republican and Democrat. From national political scandals to tempests in a teapot that blew up; bribery, blackmail, bullying, and backroom deals that contradicted public policies; cronyism that cost taxpayers hundreds upon hundreds of millions of dollars; and personal conduct that can only be described as regrettable, The Swamp is a journey downriver through the bayous and marshes of Capitol Hill and Foggy Bottom.

The presidential election of 2016 was ugly, but it exposed a political, media, industry, and elite establishment that desperately wanted to elect a politician who received millions of dollars from terror-funding states over a businessman willing to tell the corrupt or incompetent, “You’re fired.”

The book concludes with a series of recommendations for President Trump: practical, hard-headed, and concise ways to drain the swamp and force Washington to be more transparent, more accountable, and more effective in how it serves those who have elected its politicians and pay the bills for their decisions.

Last year President Trump declared Wake Up America to be a "huge" book; Eric Bolling's second book is sure to build on that success. Entertaining and timely, The Swamp is the perfect book for today's political climate.

Eric Bolling is the host of "America" on CRTV, and the New York Times, Wall Street Journal, USA Today, and Publishers Weekly bestselling author of The Swamp and Wake Up America. A native of Chicago, he lives in New Jersey.
or support indie stores by buying on
Copyright © 2020 American Booksellers Association