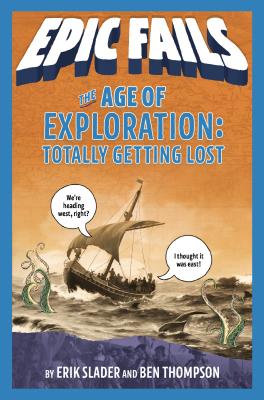 The Age of Exploration

In the fourth installment of the Epic Fails series from authors Erik Slader and Ben Thompson and illustrator Tim Foley, The Age of Exploration: Totally Getting Lost introduces readers to an international cast of trailblazers and details every mutiny, wrong turn, and undiscovered city of gold.

Christopher Columbus is one of the most famous explorers of all time, but he was neither the first nor last adventurer to ever stumble upon a great discovery. From the Silk Road of Asia to the icy shores of Antarctica, our knowledge of the world today is in large part due to several intrepid pioneers, risking life and limb for the sake of exploration. After all, setting off into the dark unknown requires an enormous amount of bravery. But every explorer quickly learns that courage and curiosity aren’t enough to save you if you can’t read a map or trespass on somebody else’s land!


Praise For The Age of Exploration: Totally Getting Lost (Epic Fails #4)…

Praise for The Wright Brothers: Nose-Diving into History:

Tim Foley was born in Flint, Michigan, and since attending college at the Kendall School of Design, has made his home in Grand Rapids on the west side of the state. A freelance illustrator for the past three decades, his work has appeared in magazines and newspapers around the world and books have included many titles in the bestselling young adult "Who Was" biography series, as well as several adult coloring books.
Loading...
or
Not Currently Available for Direct Purchase