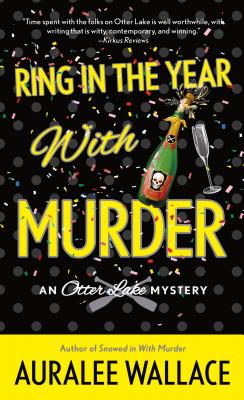 Ring In the Year with Murder

Erica Bloom and her friends race to solve a murder before the New Year in Ring In the Year with Murder, the next Otter Lake mystery from Auralee Wallace.

It’s been a tough year for Erica Bloom. And with hours left on the clock and a killer crashing the party, it’s not over yet…

This New Year’s Eve, Erica’s resolution is to have a great night—even if it kills her. She is, after all, at the party to end all parties: a Great Gatsby--themed gala sure to be the talk of Otter Lake, New Hampshire. With her perfectly finger-waved hair, borrowed pearls, and scarlet flapper dress, Erica is determined to be unflappable, despite the presence of her ex, Sheriff Grady Forrester, and his hot date, a bubbly blonde who has a hard time holding her drink. Literally. . .

In a plot twist as bizarre as a game of Clue, Grady’s girlfriend almost drops dead after her drink is poisoned. Who put the killer ingredient in her appletini? Suddenly the tables have turned and the sheriff has become the prime suspect. Now Erica has until midnight to clear the man she still loves—and in so doing just maybe win him back. That’s if the killer doesn't pop the cork again… and turn a New Year’s smooch into a kiss of death…