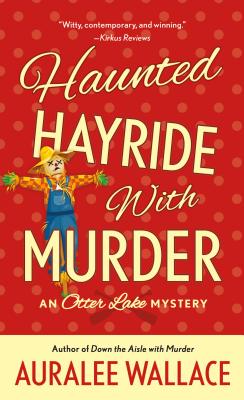 Erica Bloom and Otter Lake Security are once again on the case in Haunted Hayride with Murder, the next installment in the hilarious Otter Lake mystery series.

Erica Bloom is loving everything about autumn this year in Otter Lake, New Hampshire: changing leaves, apple cider, cozy sweaters… and the warm and fuzzy relationship that’s heating up between her and Sheriff Grady Forrester. But when some local teens out to find some Halloween thrills come across a boot with a dead man’s foot bones still inside it, a chilling new reality comes into play. Everyone in Otter Lake knows about the age-old witch who haunts the apple orchard bordering the White Mountains. So when the bones turn out to belong to a long-gone local with a scandalous connection to the orchard, stories of the spooky figure roaming the forests at night once again rise up from the past. Now it’s up to Erica and the rest of the Otter Lake Security team to expose the identity of the killer. Will they be able to lay this ghost to rest…or will this witch hunt be their last?

The Otter Lake series is: