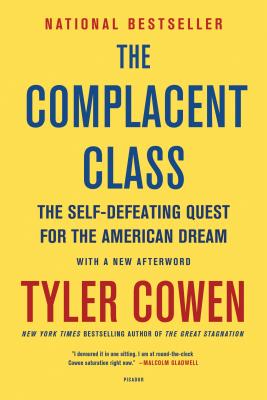 A wide-ranging, against-the-grain argument about the state of American culture—the Washington Post and Wall Street Journal bestseller--now in paperback with new material

"Tyler Cowen's blog, Marginal Revolution, is the first thing I read every morning. And his brilliant new book, The Complacent Class, has been on my nightstand after I devoured it in one sitting. I am at round-the-clock Cowen saturation right now." —Malcolm Gladwell

Tyler Cowen (Ph.D.) holds the Holbert C. Harris chair in economics at George Mason University. He is the author of Discover Your Inner Economist (2007), Create Your Own Economy (2009), NYT bestseller The Great Stagnation (2011), An Economist Get Lunch (2012), Average is Over (2013), and a number of academic books. He writes the most read economics blog worldwide, marginalrevolution.com. He has written regularly for The New York Times and contributes to a wide number of newspapers and periodicals.
Loading...
or
Not Currently Available for Direct Purchase