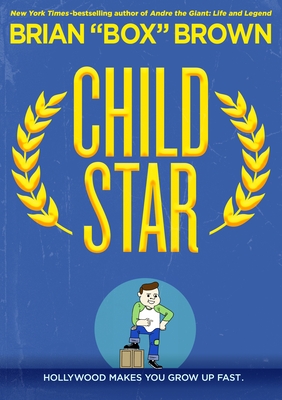 Child Star is a fictional documentary-style graphic novel about how growing up in the spotlight robs young actors of a true childhood.

Child star Owen Eugene had it all: a hit sitcom on prime time, a Saturday morning cartoon, and a memoir on the bestseller list. The secret to his success was his talent for improvisation . . . and his small size. On screen he made the whole world laugh, but behind the scenes his life was falling apart. Hollywood ate him alive.

"Brown (André the Giant) made a reputation for offbeat and accessible graphic nonfiction, but in this savvy graphic satire, he shows an equally sure hand at fiction. ...[Brown's] blocky art moves the narrative along at an enjoyable clip, and it’s appropriate that Eugene, irresistible to TV-land fans, often looks lumpy and off-putting. This in-the-know skewering of celebrity and pop culture will entertain children of the ’80s as well as their own children."—Publisher's Weekly, starred review

"As a composite, Owen is opaque, but he serves as a symbol by which Brown questions the culture’s need to perpetuate childhood and the cost the industry exacts from its chosen child archetypes. This affords much satisfaction, as does the meticulous reinvention of 1980s pop culture and the replication of video documentary style, which serves as the book’s structure."—Booklist

Brian “Box” Brown is an Eisner Award–winning author whose comics have appeared in the New York Times, Playboy, and New York magazine. His books include the New York Times–bestselling Andre the Giant: Life and Legend, Tetris: The Games People Play, Is This Guy for Real?: The Unbelievable Andy Kaufman, Cannabis: The Illegalization of Weed in America, Child Star, and Accidental Czar (with writer Andrew S. Weiss). boxbrown.com
Loading...
or
Not Currently Available for Direct Purchase