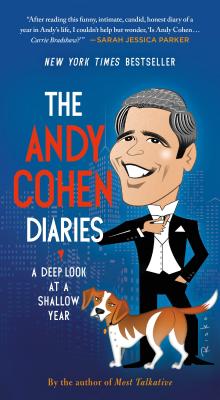 A Deep Look at a Shallow Year

A year in the whirlwind life of the beloved pop icon Andy Cohen, in his own cheeky, candid, and irreverent words

As a TV Producer and host of the smash late night show Watch What Happens Live, Andy Cohen has a front-row seat to an exciting world not many get to see. In this dishy, detailed diary of one year in his life, Andy goes out on the town, drops names, hosts a ton of shows, becomes codependent with Real Housewives, makes trouble, calls his mom, drops some more names, and, while searching for love, finds it with a dog. This honest, irreverent, and laugh-out-loud funny book is a one-of-a-kind account of the whos and whats of pop culture in the twenty-first century.

“The funniest thing I've done all year is read Andy Cohen’s Diaries. He has more genuinely funny and surprising encounters with celebrities and sublebrities in a day than I do all year. Then my name popped up. Now I just want to sue him.” —Anderson Cooper
“Andy Cohen’s Diaries are the literary equivalent of a Fresca and tequila.” —Jimmy Fallon
“Remarkable…an important text when it comes to understanding what it is to be a gay man today.”—Time

In May 2013, Cohen became a New York Times best-selling author for the second time with the release of the paperback version of his book, Most Talkative: Stories from the Frontlines of Pop Culture published by St Martin's Press. The hardcover, published by Henry Holt, also achieved similar success back in June 2012, spending 13 weeks on the list.

Cohen served as Bravo's Executive Vice President of Development and Talent from November 2011 to present. He was responsible for creating original content, developing innovative formats and identifying new talent. He also served as Executive Producer on Emmy and James Beard award-winning "Top Chef." Cohen started at Bravo in 2004 as Vice President, Original Programming and in 2005 he was elevated to Senior Vice President of Original Programming & Development. He upped to Executive Vice President of Original Programming & Development in December, 2010. Since then he has overseen an aggressive slate of unscripted series and specials including hits such as the Peabody Award winning "Project Runway," Emmy winning "Top Chef," "Queer Eye," "Work Out," "Being Bobby Brown," "Top Design," "Make Me a Supermodel," "Blow Out," "Kathy Griffin My Life On the D List," "The A List Awards" "The Millionaire Matchmaker," "Million Dollar Listing," "The Rachel Zoe Project," "Work of Art: The Next Great Artist," "Bethenny Ever After," "Tabatha’s Salon Takeover," "Shahs of Sunset," "Flipping Out," and "The Real Housewives" franchises.

Previously, Cohen was Vice President of Original Programming for TRIO (pop, culture, TV), beginning in July 2000. He was responsible for developing and supervising all of TRIO's original productions including the critically acclaimed original documentaries "Gay Republicans," "Easy Riders/Raging Bulls," "Brilliant, But Cancelled," and the original series "Pilot Season," "24w/" and "Parking Lot."

Cohen is a regular on the "Today Show" and "Morning Joe" and has cohosted "Live! with Kelly and Michael," "The View," "Anderson Live" and the 10:00am hour of "Today." He has also been a guest on "Late Show with David Letterman," "The Tonight Show with Jay Leno" and "Late Night with Jimmy Fallon."

Cohen interviewed Lady Gaga for the December cover story of Glamour Magazine. In June of 2013 he was named to Fast Company’s 100 Most Creative People in Business List. Cohen has also hosted the CFDA Fashion Awards, interviewed Rihanna live on Facebook, Jerry Seinfeld on AOL.com, and Martha Stewart at the 92nd St YMCA. In December of 2012 GQ Magazine named Cohen one of the 25 Best Dressed Men of the Year. In 2011 and 2012, he hosted the "Miss USA" and "Miss Universe" pageants live on NBC. Cohen has appeared on the covers of several magazines including Parade, Entertainment Weekly, Hamptons, and The Advocate and has been profiled by The New York Times, Glamour Magazine, Vanity Fair, People and Fortune magazine. In 2012 he was chosen as one of Broadcasting & Cable’s "Digital All-Stars" and in 2010, he was listed as one of TV Guide’s "25 Most Influential People in Television."

Prior to working at TRIO, Cohen spent 10 years at CBS News as Senior Producer of "The Early Show," overseeing the production of entertainment segments. Cohen also served as a producer for CBS News' "48 Hours" and for "CBS This Morning," where he produced live segments, celebrity profiles and covered breaking news including the Oklahoma City bombing, Hurricane Andrew, the California wildfires, and the crash of TWA Flight 800.

Born in St. Louis, Cohen is a graduate of Boston University where he received a B.A. degree in broadcast journalism. Cohen is currently on the board of directors for charity Friends In Deed and currently resides in New York City.