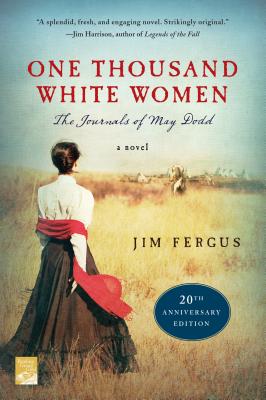 The Journals of May Dodd: A Novel (One Thousand White Women Series #1)

One Thousand White Women is the story of May Dodd and a colorful assembly of pioneer women who, under the auspices of the U.S. government, travel to the western prairies in 1875 to intermarry among the Cheyenne Indians. The covert and controversial "Brides for Indians" program, launched by the administration of Ulysses S. Grant, is intended to help assimilate the Indians into the white man's world. Toward that end May and her friends embark upon the adventure of their lifetime. Jim Fergus has so vividly depicted the American West that it is as if these diaries are a capsule in time.

Jim Fergus is the author of One Thousand White Women, The Sporting Road, A Hunter’s Road and Wild Girl. His articles and essays have appeared in a wide variety of national magazines and newspapers, including Newsweek, Newsday, The Paris Review, Esquire, Sports Afield, and Field & Stream. Fergus was born in Chicago and attended Colorado College. He worked as a teaching tennis professional before becoming a full-time freelance writer. He lives in southern Arizona.
or support indie stores by buying on
Copyright © 2020 American Booksellers Association