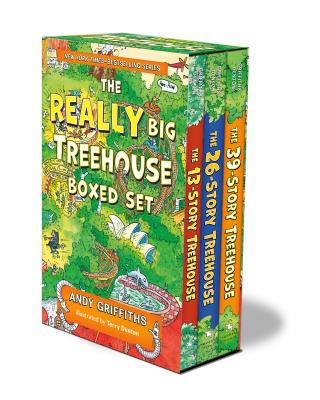 This treehouse starts with thirteen stories, a bowling alley, a see-through swimming pool, and a secret underground laboratory. And it keeps getting bigger! Soon the treehouse has twenty-six stories, then thirty-nine as Andy and Terry keep adding more levels and rooms, including a skate ramp, anti-gravity chamber, an active volcano, a chocolate waterfall and more!

The 26-Story Treehouse
"Twice the treehouse, twice the fun? You bet . . . Kids should be flipping pages faster than a pair of inflatable underpants can skyrocket the young heroes to safety." —Publishers Weekly, starred review