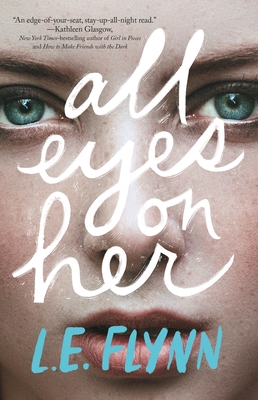 All Eyes on Her

Perfect for fans of One of Us is Lying and We Were Liars, All Eyes on Her by L.E. Flynn is a gripping young adult thriller told from the perspective of everyone except the alleged killer—a seventeen-year-old girl.

You heard the story on the news. A girl and a boy went into the woods. The girl carried a picnic basket. The boy wore bright yellow running shoes. The girl found her way out, but the boy never did…

Everyone thinks they know what happened. Some say Tabby pushed him off that cliff— she didn’t even like hiking. She was jealous. She had more than her share of demons. Others think he fell accidentally—she loved Mark. She would never hurt him…even if he hurt her.

But what’s the real story? All Eyes On Her is told from everyone but Tabby herself as the people in her life string together the events that led Tabby to that cliff. Her best friend. Her sister. Her enemy. Her ex-boyfriend. Because everybody thinks they know a girl better than she knows herself.

What do you think is the truth?

Praise for Last Girl Lied To:

"Fans of E. Lockhart, Karen M. McManus, and Flynn’s other work will revel in this mystery/thriller and the authenticity with which its characters are rendered." —Booklist


Praise For All Eyes on Her…

"Will keep readers guessing at the truth—and second-guessing their own biases—until the very end. A frenzied psychological thriller, superbly paced." —Booklist, starred review

"The tension [is] relentlessly and excruciatingly high in this twisting psychological thriller...A lacerating interrogation of a society that assigns little power to teen girls and damns them when they reach for anything that looks like agency." —Bulletin of the Center for Children's Books

"Through its characters, the novel explores how young women are often put into black-and-white categories by society. A thrilling and engaging novel that will draw readers in from the first line. Pair with Karen M. McManus’s One of Us Is Lying." —School Library Journal

"Multidimensional characters and ever-shifting truths make All Eyes on Her a captivating murder mystery." –Shelf Awareness

"Flynn explores slut-shaming culture and unrealistic expectations forced upon teenage girls in this edgy psychological thriller, perfect for fans of We Were Liars and One of Us Is Lying." —Kirkus

“I can’t lie: Last Girl Lied To is my favorite thriller of 2019. Flynn’s perfectly paced story about a girl who can't trust anyone integrates important subjects, like body image, addiction, and romantic obsession, imaginatively and masterfully. Twisted and delicious.”
—Kim Savage, author of In Her Skin

“A twisty, piercing thriller with an end you won't see coming.”
—Mindy McGinnis, author of Female of the Species

L.E. Flynn is the author of Firsts, a YALSA Best Fiction for Young Adults pick, and Last Girl Lied To. Flynn is a former model who worked in Tokyo, Athens, and Paris. Flynn now lives in London, Ontario with her husband, daughter, and the world’s most spoiled Chihuahua. When she's not writing, you can likely find her hiking in the woods, perusing thrift stores for vintage dresses, or binging on reality TV.
Loading...
or support indie stores by buying on