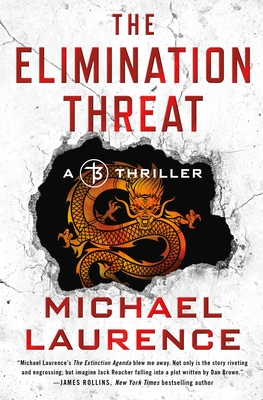 Michael Laurence delivers The Elimination Threat, the next installment in a series described as “Jack Reacher falling into a plot written by Dan Brown.” —James Rollins, #1 New York Times bestselling author of Crucible

For centuries, a mysterious syndicate known as the Thirteen has staged a silent coup, infiltrating governments and manipulating the course of world events. It’s more powerful than any nation, deadlier than any army, and only FBI Special Agent James Mason and his longtime friends stand in its way. After narrowly preventing the release of a toxic chemical weapon, they find themselves pitted against their most terrifying adversary yet: a mass murderer with a twisted signature and a true believer in the cause of the Thirteen known only as the Dragon.

With the fate of the nation’s capital hanging in the balance and the threat of nuclear destruction on the horizon, Mason’s team must unravel a conspiracy involving a greedy investment bank, a sadistic drug cartel, and a Russian energy company before it’s too late. And the secret to doing so lies buried in the past, in a dark union between the financial sector and an apocalyptic cult hellbent on remaking the world in its own image. Can Mason expose the lethal machinations of the cabal in time, or will the Thirteen finally make good on its elimination threat?

"[A] thrill-ride a minute. Nonstop action and twists and turns keep the reader engaged throughout." —Red Carpet Crash on The Annihilation Protocol

"The mixture of science, history, and conspiracy echoes the work of James Rollins and Steve Berry. The pacing never lets up." —Booklist on The Extinction Agenda

Michael Laurence was born in Colorado Springs, Colorado to an engineer and a teacher, who kindled his passions for science and history. He studied biology and creative writing at the University of Colorado and holds multiple advanced certifications in medical imaging. Before becoming a full-time author, he worked as an x-ray/CT/MRI technologist and clinical instructor. He lives in suburban Denver with his wife, four children, and a couple of crazy Labrador Retrievers.
Loading...
or support indie stores by buying on