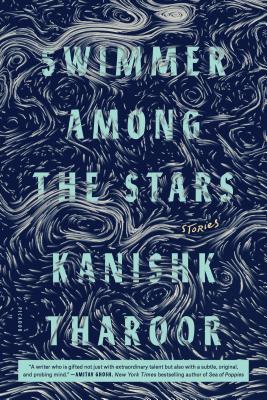 Swimmer Among the Stars (Paperback)

A Guardian Best Book of the Year

“A writer who is gifted not just with extraordinary talent but also with a subtle, original, and probing mind.” —Amitav Ghosh

In one of the singularly imaginative stories from Kanishk Tharoor’s Swimmer Among the Stars, despondent diplomats entertain themselves by playing table tennis in zero gravity—for after rising seas destroy Manhattan, the United Nations moves to an orbiting space hotel. In other tales, a team of anthropologists treks to a remote village to record a language’s last surviving speaker intoning her native tongue; an elephant and his driver cross the ocean to meet the whims of a Moroccan princess; and Genghis Khan’s marauding army steadily approaches an unnamed city’s walls.

With exuberant originality and startling vision, Tharoor cuts against the grain of literary convention, drawing equally from ancient history and current events. His world-spanning stories speak to contemporary challenges of environmental collapse and cultural appropriation, but also to the workings of legend and their timeless human truths. Whether refashioning the romances of Alexander the Great or confronting the plight of today’s refugees, Tharoor writes with distinctive insight and remarkable assurance. Swimmer Among the Stars announces the arrival of a vital, enchanting talent.

Kanishk Tharoor is a writer based in New York City. His writing has appeared in The New York Times, Guardian, the VQR, and elsewhere. His short story “Tale of the Teahouse” was nominated for a National Magazine Award. He presented "Museum of Lost Objects," a ten-part BBC radio series on cultural destruction in the Middle East. He studied at Yale, Columbia, and New York University, where he was a “Writer in Public Schools” fellow.

Kanishk is the author of Swimmer Among the Stars: Stories.


Praise For Swimmer Among the Stars: Stories…

“[A] remarkably crafted and imaginative debut . . . if it's true, as is said in "The Loss of Muzaffar," that "humanity, after all, was nothing but a library," then the experience of reading this collection is like watching a contemplative, concerned—yet playful—observer leafing through its volumes.” —Meron Hadero, The New York Times Book Review

"Sparkling, magical, heartbreaking . . . whimsical and wise . . . graceful, haunting. . . It's a testament to the author's empathy, rich voice, and immaculate craftsmanship that [Swimmer Among the Stars] succeeds in being all these things — even as it comforts, illuminates, and unnerves.” —Jason Heller, NPR

“You can open Swimmer Among the Stars to any page and find a sentence worth quoting, a scenario worth remembering. Though the stories span the Battle of Magnesia, in which Rome defeated the Seleucid Empire, to a dystopian future in which the United Nations has been chased to a near-Earth orbit, Tharoor wears his erudition lightly, privileging poetry over political messaging. Lush, playful, and intoxicated by history, the book stuck with me long after I closed it.” —David Busis, Electric Literature

“It's the details within the details that get me—there's just this beautiful telescoping the writing does between a kind of ruthless precision and something just as close up but more tender, like counting fingers and toes.” —Helen Oyeyemi

“A virtuoso debut collection that is as globalist as it is fabulist.” —O Magazine

“Cosmopolitan in its approaching the world as one large village with many shared narratives, this collection reminds us of all that we have in common, even as we demarcate our differences with walls and borders. Tharoor writes with a clarity that expresses his insights into characters and contexts, ultimately attaining a striking lushness.” —Shoba Viswanathan, Booklist

“Tharoor is clearly a monumental talent, and his debut is a pleasure, from the first page to the last.” —Kirkus Reviews (starred review)

“It’s been years since I’ve encountered a collection as beguiling as Swimmer Among the Stars. Kanishk Tharoor seems to have sprung onto the scene fully formed, possessed of his own mischievous and erudite voice, already at the full height of his powers. Literary debuts are often described as ‘promising’; here are stories that read like promises fulfilled.” —John Wray

“Like the storytellers of old, as well as the art’s 20th century masters, Kanishk Tharoor brings together times past and our present day in his dazzling fables where the exotic and the mundane, the lost and the hoped for, are woven into images that remind the reader that it is through sharing stories, and maybe stories alone, that civilizations and their subjects come together in surviving whatever tasks history sets for them.” —Sjón

“These stories gleam with the light of an authentic and wholly original imagination, beautifully crafted and in possession of an untamed, almost feral sense of creativity. With Borgesian intelligence and great tenderness of heart, Tharoor reminds us how vital it is to tell stories, and how urgently we need to consume them.” —Alexandra Kleeman, author of You Too Can Have a Body Like Mine

His writing has the clarity and expansiveness of fable.” - Sunday Times

“I encountered Kanishk Tharoor’s stories at a time when I needed to find meaning in loss and context for what we have at stake in the world today. The stories reminded me of the power of empathy and connection in our shared experience and the need for imagination, even playfulness and humor, in times of adversity. The English writer Philip Pullman said: “After nourishment, shelter and companionship, stories are the thing we need most in the world”; and according to Tim O’Brien, stories save us. While I don’t think we can count on stories alone to save us, stories like these hold a small, glimmering light—they illuminate what we have to lose, perhaps embolden us to claim what is ours, and let our humanity shine.” — Laura Haugen, Ploughsares

“In sumptuous, thought-provoking detail, the subtleties of human emotion and interaction are carefully explored. Translating food into words, dishes into phrases, Tharoor has the ability to shine the perfect amount of light on the most magical and sensitive of moments, and is unafraid of taking his time to do so. Swimmer Among the Stars dazzles.” — Zyzzyva magazine

“Tharoor’s collection is glittering in its ingenuity, his prose lyrical and tender, but with a slicing wit. Taken together, the stories in Swimmer Among the Stars seem to be asking: What tales do we tell each other in times of cultural anxiety and impending crisis? How do we communicate in the face of catastrophe?”– Rebecca Bates, Sweet