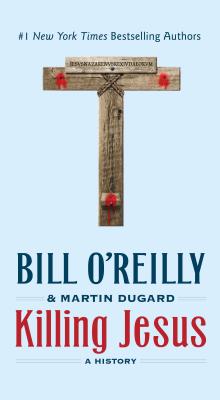 FROM BLOCKBUSTER BESTSELLING AUTHOR AND TRAILBLAZING TV JOURNALIST BILL O' REILLY AND MARTIN DUGARD COMES THE STORY OF ONE OF THE MOST INFLUENTIAL MOMENTS IN WORLD HISTORY: THE CRUCIFIXION OF JESUS CHRIST.

Nearly two thousand years after this beloved and controversial young revolutionary was brutally killed by Roman soldiers, more than 2.2 billion human beings not only attempt to follow Jesus of Nazareth’s teachings but believe he is God. In this riveting account of Jesus’s life and times, Julius Caesar, Cleopatra, Caesar Augustus, Herod the Great, Pontius Pilate, and John the Baptist are among the legendary figures who play a part in Jesus’s story. Killing Jesus takes readers inside this most volatile epoch and the seismic political and historical events that made Jesus’s death inevitable—and changed the world forever.

“All the suspense and drama of a popular thriller.” —The Christian Science Monitor

MARTIN DUGARD is the New York Times bestselling author of several books of history, among them the Killing series, Into Africa, and The Explorers. He and his wife live in Southern California with their three sons.
Loading...
or support indie stores by buying on
(This book is on backorder)