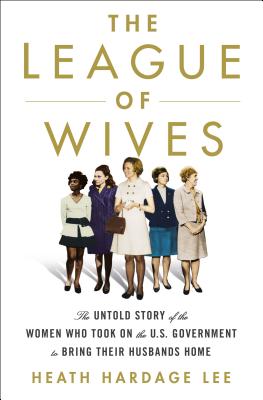 The League of Wives

The Untold Story of the Women Who Took on the U.S. Government to Bring Their Husbands Home

"With astonishing verve, The League of Wives persisted to speak truth to power to bring their POW/MIA husbands home from Vietnam. And with astonishing verve, Heath Hardage Lee has chronicled their little-known story — a profile of courage that spotlights 1960s-era military wives who forge secret codes with bravery, chutzpah and style. Honestly, I couldn’t put it down."
— Beth Macy, author of Dopesick and Factory Man

The true story of the fierce band of women who battled Washington—and Hanoi—to bring their husbands home from the jungles of Vietnam.

On February 12, 1973, one hundred and sixteen men who, just six years earlier, had been high flying Navy and Air Force pilots, shuffled, limped, or were carried off a huge military transport plane at Clark Air Base in the Philippines. These American servicemen had endured years of brutal torture, kept shackled and starving in solitary confinement, in rat-infested, mosquito-laden prisons, the worst of which was The Hanoi Hilton.

Months later, the first Vietnam POWs to return home would learn that their rescuers were their wives, a group of women that included Jane Denton, Sybil Stockdale, Louise Mulligan, Andrea Rander, Phyllis Galanti, and Helene Knapp. These women, who formed The National League of Families, would never have called themselves “feminists,” but they had become the POW and MIAs most fervent advocates, going to extraordinary lengths to facilitate their husbands’ freedom—and to account for missing military men—by relentlessly lobbying government leaders, conducting a savvy media campaign, conducting covert meetings with antiwar activists, and most astonishingly, helping to code secret letters to their imprisoned husbands.

In a page-turning work of narrative non-fiction, Heath Hardage Lee tells the story of these remarkable women for the first time. The League of Wives is certain to be on everyone’s must-read list.


Praise For The League of Wives: The Untold Story of the Women Who Took on the U.S. Government to Bring Their Husbands Home…

"With astonishing verve, The League of Wives persisted to speak truth to power to bring their POW/MIA husbands home from Vietnam. And with astonishing verve, Heath Hardage Lee has chronicled their little-known story — a profile of courage that spotlights 1960s-era military wives who forge secret codes with bravery, chutzpah and style. Honestly, I couldn’t put it down."
— Beth Macy, author of Dopesick and Factory Man

“Heath Hardage Lee’s The League of Wives recounts the powerful story of how a cabal of indomitable POW and MIA wives relentlessly campaigned to free their captive husbands during the Vietnam War. Duty, honor, country, and love of family prevail. A must read!”
— Douglas Brinkley is the Katherine Tsanoff Brown Chair in Humanities and Professor of History at Rice University and author of Cronkite.

“You’ll put hand to heart after reading The League of Wives about Americans who epitomize heroism in high heels. From white gloves to boxing gloves these military wives, once quiet and subservient, became warriors to save their POW MIA husbands shot down in Vietnam. They battled their government—challenged the State Department, the Pentagon, even the White House—to stand up and make the enemy accountable to the accords of the Geneva Convention. Girls with grit, these wives deserve the supreme salute, and Heath Hardage Lee honors them with grace and humanity.”
—Kitty Kelley, author of His Way, Oprah, The Family and many others

"A stirring, dramatic tale of the incredible women who changed American culture, The League of Wives is a book much needed today. Heath Hardage Lee tells this inspiring story with verve and a sharp eye for detail. Highly recommended!”
—Jonathan Eig, author of Ali: A Life and The Birth of the Pill.

"A remarkable true story of love, war, courage, constancy and change—as a group of naval housewives transformed themselves into powerful advocates for their missing husbands. Drawing strength from one another, the women took on not one but two governments—the enemy’s and their own, to seek a safe return for the men. Their bravery will inspire you. I love this book!"
—Liza Mundy, author of Code Girls

"A book both educational and emotional."—Kirkus

"[An] inspirational work...In this beautifully told history, Lee unearths the contributions of everyday women who not only saved their husbands but influenced military culture." —Publisher's Weekly

“Can there be any major Civil War story that we haven’t heard? The answer is, yes! Here comes Heath Lee with the fascinating—and surprising—life of Varina Anne ‘Winie’ Davis. . . . Clear, strong writing brings the history, mores, and manners of the day brilliantly to life.”—Lee Smith, author of Guests on Earth and Fair and Tender Ladies

“Heath Lee has written a beautiful and thoughtful biography of Winnie Davis. . . . This is, in a sense, a biography of America in the aftermath of a civil war as much as it is a captivating story of a young woman who struggled to preserve her individuality when others elevated her to an icon.”—Carol Berkin, author of Civil War Wives and Wondrous Beauty

Heath Hardage Lee comes from a museum education and curatorial background, and she has worked at history museums across the country. She holds a B.A. in History with Honors from Davidson College, and an M.A. in French Language and Literature from the University of Virginia. Heath served as the 2017 Robert J. Dole Curatorial Fellow, and her exhibition entitled "The League of Wives: Vietnam POW MIA Advocates & Allies" premiered at the Robert J. Dole Institute of Politics in 2017. Heath's first book, Winnie Davis: Daughter of the Lost Cause, won the 2015 Colonial Dames of America Annual BookAward as well as a 2015 Gold Medal for Nonfiction from the Independent Publisher Book Awards.
Loading...
or
Not Currently Available for Direct Purchase