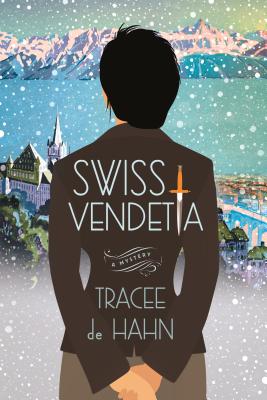 "Swiss Vendetta is a true page turner. From the cook and maids to the Marquise and her family, de Hahn captures the nuances of her characters’ backgrounds and perspectives. I found the plot fascinating, and de Hahn builds the tension and suspense perfectly to a satisfying conclusion. I was left wanting to read more about Agnes, and I am looking forward to her next adventure!"—Charles Todd

Inspector Agnes Lüthi, a Swiss-American police officer in Lausanne, Switzerland, has just transferred to the Violent Crimes unit from Financial Crimes to try to shed all reminders of her old life following her husband's death. Now, on the eve of the worst blizzard Lausanne has seen in centuries, Agnes has been called to investigate her very first homicide case. On the lawn of the grand Château Vallotton, at the edge of Lac Léman, a young woman has been found stabbed to death. The woman, an appraiser for a London auction house, had been taking inventory at the château, a medieval fortress dripping in priceless works of art and historical treasures.

Agnes finds it difficult to draw answers out of anyone—the tight-lipped Swiss family living in the château, the servants who have been loyal to the family for generations, the aging WWII survivor who lives in the neighboring mansion, even the American history student studying at the Vallotton château's library. As the storm rages on, roads become impassible, the power goes out around Lausanne, and Agnes finds herself trapped in the candlelit halls of the château with all the players of the mystery, out of her depth in her first murder case and still struggling to stay afloat after the death of her husband.

“Secret pasts and hidden motives abound as Inspector Agnes Luthi hunts for a killer in this elegant and suspenseful novel. Tense, atmospheric, and richly detailed, Swiss Vendetta is a gripping, multilayered mystery that will keep you guessing until the very end!”—Ashley Weaver, author of Murder at the Brightwell

"Fans of both contemporary and historical mystery will devour this debut from Tracee de Hahn as her modern-day sleuth wades through secrets and deceptions in a centuries-old chateau."—Alyssa Maxwell, author of The Gilded Newport Mysteries

“Absorbing…De Hahn sets up a locked-room mystery with potential for rich interpersonal tensions. The rarefied, restrictive world of Swiss aristocracy provides a tantalizing backdrop, and Agnes—born to American parents, raised in Switzerland, and a widowed mother of three sons after her husband’s recent suicide—is a strong series lead…Those who like a fireside read on a winter night will be pleased.”—Publishers Weekly

“This clever take on the locked-room mystery—a locked château, if you will—introduces readers to an appealing heroine in an unusual setting in what will hopefully be a long series.”—Library Journal

“The Swiss American Lüthi is an intriguing protagonist whom international-mystery readers will want to meet again.”—Booklist

TRACEE DE HAHN completed degrees in architecture and European history at the University of Kentucky and then lived in Europe, including several years in Switzerland. She currently lives in Virginia with her husband, a Swiss architect, and their Jack Russell Terriers.
Loading...
or support indie stores by buying on