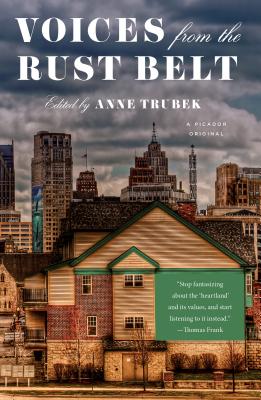 Voices from the Rust Belt

The essays in Voices from the Rust Belt "address segregated schools, rural childhoods, suburban ennui, lead poisoning, opiate addiction, and job loss. They reflect upon happy childhoods, successful community ventures, warm refuges for outsiders, and hidden oases of natural beauty. But mainly they are stories drawn from uniquely personal experiences: A girl has her bike stolen. A social worker in Pittsburgh makes calls on clients. A journalist from Buffalo moves away, and misses home.... A father gives his daughter a bath in the lead-contaminated water of Flint, Michigan" (from the introduction).

Where is America's Rust Belt? It's not quite a geographic region but a linguistic one, first introduced as a concept in 1984 by Walter Mondale. In the modern vernacular, it's closely associated with the "Post-Industrial Midwest," and includes Michigan, Ohio, and Pennsylvania, as well as parts of Illinois, Wisconsin, and New York. The region reflects the country's manufacturing center, which, over the past forty years, has been in decline. In the 2016 election, the Rust Belt's economic woes became a political talking point, and helped pave the way for a Donald Trump victory.

But the region is neither monolithic nor easily understood. The truth is much more nuanced. Voices from the Rust Belt pulls together a distinct variety of voices from people who call the region home. Voices that emerge from familiar Rust Belt cities—Detroit, Cleveland, Flint, and Buffalo, among other places—and observe, with grace and sensitivity, the changing economic and cultural realities for generations of Americans.


Praise For Voices from the Rust Belt…

"Stop fantasizing about the “heartland” and its values and start listening to it instead. Here is the true voice of the America we like to imagine as the repository of national virtue. How different from what we expect, and yet how trenchant it is." --Thomas Frank, Bestselling Author of What's the Matter with Kansas?

"The fresh, directly-told, and timely accounts of Voices from the Rust Belt make it a welcome and engaging addition to the literature of the American urban Midwest. And in the current political context of a Make America Great Again presidency this book, with its diverse, complex vision of the so-called Rust Belt, affords a crucial corrective to the simplistic, clichéd, backward-looking narrative of regional American history and of its values both past and present." --Stuart Dybek, author of The Coast of Chicago

"The two dozen writers in Voices from the Rust Belt can't possibly cover all of the wrinkles and shades particular to a place whose boundaries aren't even unanimously agreed upon, but it's a good place to start." --Salon

"There has plenty of recent effort to answer the questions of the Rust Belt. This book goes one better: It deepens the questions. Voices from the Rust Belt is a vital, richly textured addition to the national conversation, the truth told from the inside at a time when our region needs it most."
--David Giffels, author of Furnishing Eternity and The Hard Way on Purpose: Essays and Dispatches from the Rust Belt

“These essays go a long way toward expanding the narrative about the Rust Belt in that they refute stereotypes, explore a vastly varied series of experiences, and provide a valuable history lesson on industrialism.”—Publishers Weekly

Anne Trubek is the founder and director of Belt Publishing. She is the author of The History and Uncertain Future of Handwriting and A Skeptic’s Guide to Writers’ Houses, and the co-editor of Rust Belt Chic: The Cleveland Anthology.
Loading...
or
Not Currently Available for Direct Purchase