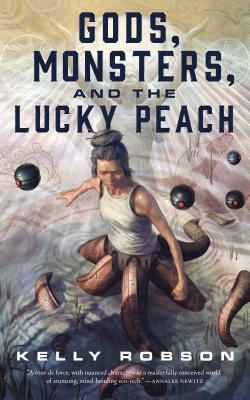 "Brilliantly structured . . . with a delicious tension carefully developed among the wonderful characters." —The New York Times

Discover a shifting history of adventure as humanity clashes over whether to repair their ruined planet or luxuriate in a less tainted past.

In 2267, Earth has just begun to recover from worldwide ecological disasters. Minh is part of the generation that first moved back up to the surface of the Earth from the underground hells, to reclaim humanity's ancestral habitat. She's spent her entire life restoring river ecosystems, but lately the kind of long-term restoration projects Minh works on have been stalled due to the invention of time travel. When she gets the opportunity take a team to 2000 BC to survey the Tigris and Euphrates rivers, she jumps at the chance to uncover the secrets of the shadowy think tank that controls time travel technology.

KELLY ROBSON’s fiction has appeared in Asimov’s Science Fiction, Tor.com, Clarkesworld Magazine, and several anthologies. Her Tor.com novella Waters of Versailles won the 2016 Aurora Award, and she has also been a finalist for the Nebula Award, World Fantasy Award, Theodore Sturgeon Award, Sunburst Award, and John W. Campbell Award for Best New Writer. Her stories have been included in numerous year’s best anthologies, and she is a regular contributor to the Another Word column at Clarkesworld.

Kelly grew up in the foothills of the Canadian Rocky Mountains and competed in rodeos as a teenager. From 2008 to 2012, she was the wine columnist for Chatelaine, Canada’s largest women’s magazine. After many years in Vancouver, she and her wife, fellow SF writer A.M. Dellamonica, now live in Toronto.


Praise For Gods, Monsters, and the Lucky Peach…

"Brilliantly structured . . . with a delicious tension carefully developed among the wonderful characters." —The New York Times

“Gods, Monsters, and the Lucky Peach is a tour-de-force, with nuanced characters in a masterfully conceived world of stunning, mind-bending eco-tech. Absolutely brilliant storytelling. I didn’t want it to end.” —Annalee Newitz, co-founder of io9 and author of Autonomous

“The far future, the distant past. Time travel, bioengineering, office politics— and ecological consulting. How could I not love this?” —Peter Watts, author of Echopraxia

“A necessary meditation on the nature of change and the sacrifice required to manifest it, Robson's novella pulls no punches, spares no rods, and leaves no idea unexamined.” —Madeline Ashby, author of Company Town