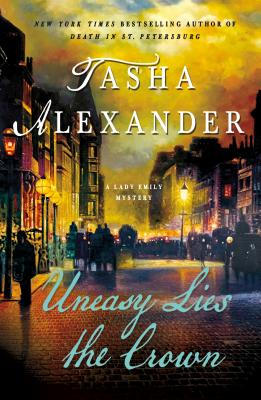 In Uneasy Lies the Crown, the thrilling new mystery in Tasha Alexander's bestselling series, Lady Emily and her husband Colin must stop a serial killer whose sights may be set on the new king, Edward VII.

On her deathbed, Queen Victoria asks to speak privately with trusted agent of the Crown, Colin Hargreaves, and slips him a letter with one last command: Une sanz pluis. Sapere aude. “One and no more. Dare to know.”

The year is 1901 and the death of Britain’s longest-reigning monarch has sent the entire British Empire into mourning. But for Lady Emily and her dashing husband, Colin, the grieving is cut short as another death takes center stage. A body has been found in the Tower of London, posed to look like the murdered medieval king Henry VI. When a second dead man turns up in London's exclusive Berkeley Square, his mutilated remains staged to evoke the violent demise of Edward II, it becomes evident that the mastermind behind the crimes plans to strike again.

The race to find the killer takes Emily deep into the capital’s underbelly, teeming with secret gangs, street children, and sleazy brothels—but the clues aren’t adding up. Even more puzzling are the anonymous letters Colin has been receiving since Victoria's death, seeming to threaten her successor, Edward VII. With the killer leaving a trail of dead kings in his wake, will Edward be the next victim?

“Readers are in the author’s trustworthy hands, and the working out of the puzzle will delight
mystery and history buffs alike.” —Booklist

“The breathtaking beauty of St. Petersburg before the Russian Revolution provides a dazzling backdrop for murder.”—Kirkus Reviews

"Alexander is at the top her game...(her) impeccable research and smart storytelling keep readers on the edge of their seats...A gripping tale by a grand mistress of the genre."—RT Book Reviews (Top Pick)

“Alexander delivers a memorable portrait of a fairy-tale city dancing on the brink of revolution.” —Publisher's Weekly

Tasha Alexander is the author of the New York Times bestselling Lady Emily mystery series (Tears of Pearl, Dangerous to Know, and A Crimson Warning). The daughter of two philosophy professors, she studied English Literature and Medieval History at the University of Notre Dame. She and her husband, novelist Andrew Grant, live on a ranch in southeastern Wyoming.
Loading...
or support indie stores by buying on