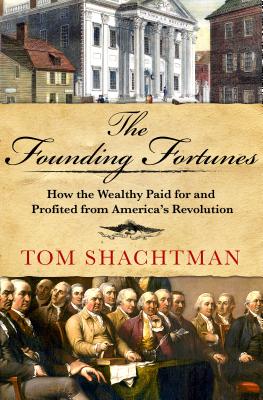 How the Wealthy Paid for and Profited from America's Revolution

In The Founding Fortunes, historian Tom Shachtman reveals the ways in which a dozen notable Revolutionaries deeply affected the finances and birth of the new country while making and losing their fortunes.

While history teaches that successful revolutions depend on participation by the common man, the establishment of a stable and independent United States first required wealthy colonials uniting to disrupt the very system that had enriched them, and then funding a very long war. While some fortunes were made during the war at the expense of the poor, many of the wealthy embraced the goal of obtaining for their poorer countrymen an unprecedented equality of opportunity, along with independence.

In addition to nuanced views of the well-known wealthy such as Robert Morris and John Hancock, and of the less wealthy but influential Alexander Hamilton, The Founding Fortunes offers insight into the contributions of those often overlooked by popular history: Henry Laurens, the plantation owner who replaced Hancock as President of Congress; pioneering businessmen William Bingham, Jeremiah Wadsworth, and Stephen Girard; privateer magnate Elias Hasket Derby; and Hamilton’s successors at Treasury, Oliver Wolcott, Jr. and Albert Gallatin.

The Founders dealt with tariffs, taxes on the wealthy, the national debt, regional disparities, the census as it affected finances, and how much of what America needs should be manufactured at home in ways that remain startlingly relevant. Revelatory and insightful, The Founding Fortunes provides a riveting history of economic patriotism that still resonates today.

Tom Shachtman is an author, filmmaker, and educator. He has written or co-authored more than thirty books, including Rumspringa, Airlift to America, and Terrors and Marvels, as well documentaries for ABC, CBS, NBC, and PBS, and has taught at major universities. Publishers Weekly lauded his book Rumspringa: To Be or Not to Be Amish as "not only one of the most absorbing books ever written about the Plain People, but a perceptive snapshot of the larger culture in which they live and move." He has written articles for The New York Times, Newsday, Smithsonian, and environmental monthlies, and writes a column for The Lakeville Journal (CT). A two-hour television documentary based on his book Absolute Zero and the Conquest of Cold was broadcast on PBS in February 2008.

Praise For The Founding Fortunes: How the Wealthy Paid for and Profited from America's Revolution…

Praise for The Founding Fortunes:

“An ingenious examination of how money played the central role in the founding of the United States…a provocative argument.” —Kirkus Reviews

"A commendable treatment of pecuniary matters during this country’s embryonic stages...recommended for readers interested in fiscal matters and American economic habits." —Library Journal

"The author makes a convincing case that, without France, the United States may never have gained independence."—Kirkus Reviews for How the French Saved America

"Shachtman illuminates the impact of French contributions to American military leadership, resources, and engineering knowledge...of interest to American-history enthusiasts and Francophiles alike.” —Publishers Weekly for How the French Saved America

"This book deserves a place on the bookshelf of every American history buff." —Jeswald W. Salacuse, author and professor at The Fletcher School for How the French Saved America

“An intriguing survey of science’s influence on the Founders.”—Booklist for Gentleman Scientists and Revolutionaries

“A fascinating and unique look at the history of the founding of the United States."—Library Journal for Gentleman Scientists and Revolutionaries

“Shachtman is like a maestro, masterfully conducting an orchestra of history, anthropology, psychology, sociology, and journalism together in a harmonious and evocative symphony of all things Amish.”—Christian Science Monitor for Rumspringa, To Be or Not to Be Amish