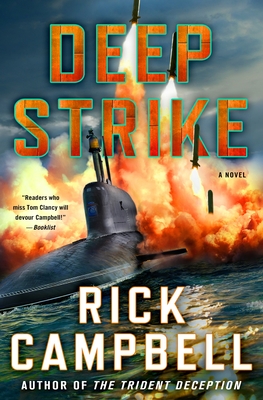 In Rick Campbell's next action-packed thriller Deep Strike, the U.S. Atlantic fleet is in a race to stop a rogue Russian submarine—funded by ISIS—en route to launch a missile attack against the east coast of the U.S.

A shoulder-launched missile attack on a convoy of vehicles leaving the U.N. headquarters in New York kills several diplomats, including the American ambassador. Security footage reveals that the killer behind the attack is a disgraced former special forces operative, Mark Alperi. But before U.S. intelligence operatives can catch up with him, Alperi is already onto the next phase of his plan.

With funding from the nearly shattered ISIS, Alperi plans an attack on the U.S. that will be more devastating than 9/11. He bribes a desperate Russian submarine commander with access to an expensive experimental drug for his daughter who is suffering from a rare disease. In exchange, the Russian commander will take his submarine to the Atlantic Ocean and launch a salvo of missiles at various targets along the East Coast of the United States. The commander lies to his crew that it's a secret mission, with dummy missiles, for a training exercise. At the same time, unbeknownst to the commander, Alperi has arranged for four of the missile warheads to be replaced with four surplus nuclear warheads and arms them.

When the Russian submarine sinks the U.S. sub that is tracking it, the U.S. military is alarmed. When Intelligence uncovers Alperi's plot, though, it becomes a race against time—find the Russian sub and sink it before it can launch a devastating nuclear attack.

Rick Campbell, a retired Navy Commander, spent more than twenty years on multiple submarine tours. On his last tour, he was one of the two men whose permission was required to launch the submarine's nuclear warhead-tipped missiles. Campbell is the author of The Trident Deception, Empire Rising and Ice Station Nautilus, and lives with his family in the greater Washington, D.C. area.
Loading...
or
Not Currently Available for Direct Purchase