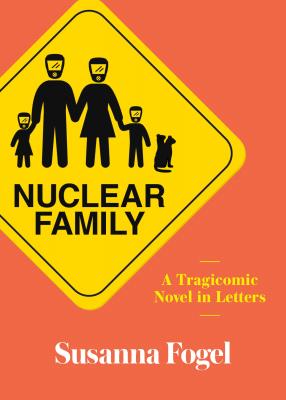 A Tragicomic Novel in Letters

From the director of The Spy Who Dumped Me, Susanna Fogel, comes a comedic novel about a fractured family of New England Jews and their discontents, over the course of three decades. Told entirely in letters to a heroine we never meet, we get to know the Fellers through their check-ins with Julie: their thank-you notes, letters of condolence, family gossip, and good old-fashioned familial passive-aggression.

Together, their missives - some sardonic, others absurd, others heartbreaking - weave a tapestry of a very modern family trying (and often failing) to show one another they care.

The titular "Nuclear Family" includes, among many others:

A narcissistic former-child-prodigy father who has taken up haiku writing in his old age and his new wife, a traditional Chinese woman whose attempts to help her stepdaughter find a man include FedExing her silk gowns from Filene's Basement.

Their six-year-old son, Stuart, whose favorite condiment is truffle oil and who wears suits to bed.


Praise For Nuclear Family: A Tragicomic Novel in Letters…

“This brilliant patchwork portrait of a modern family dynamic puzzled together through disparate, often passive-aggressive messaging rings heart-achingly true in our age of family diplomacy by text and email. Fortunately for us it’s also hilarious." —Nick Offerman

“[P]olitically incorrect, but u prob won’t mind b/c other parts are so funny.”—Kirkus Reviews

“Fogel’s novel offers plenty of glimpses—both humorous and endearing—into the life of a single woman with a well-meaning, if clueless, family.” —Publishers Weekly

Susanna Fogel is a Rhode Island native and apologist. She writes and directs films and television, including the comedy feature Life Partners and the ABC television series Chasing Life. She is an alumna of the Sundance Screenwriters Lab and Columbia University. Her writing has appeared in The New Yorker and Time Magazine. She lives in New York and Los Angeles. And she has bangs, obviously. Nuclear Family is Susanna's first novel.
Loading...
or
Not Currently Available for Direct Purchase