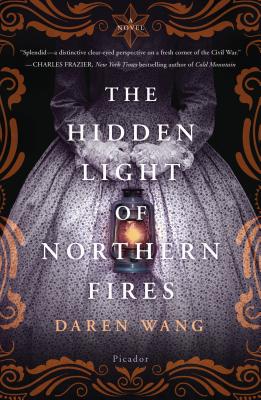 The Hidden Light of Northern Fires

“In The Hidden Light of Northern Fires, a town on the Underground Railroad secedes from the Union after it becomes fractured by the politics of the American Civil War. As a huge geek on the subject, I'm often skeptical of historical fiction relating to it. While Wang's tale benefits from being based on truth, that is a moot point. His well-developed, very real characters and masterful writing are all that's needed for an incredible debut. Though a novel of the home front, it is nonetheless a war novel focusing on how conflict brings out the best and worst in people. It is one of the best works of historical fiction on the Civil War that I've ever read, and perhaps even that exists.”
— Carl Kranz, The Fountain Bookstore, Richmond, VA
View the List

“The Hidden Light of Northern Fires, Daren Wang’s creative reimagining of the true story of a small northern town that voted to secede with the south—as experienced by a white abolitionist woman and a fugitive slave—is a page-turning yarn. I was delighted to have my mind opened to the radical possibilities of historical fiction to illuminate and explore perspectives outside of the dominant narratives—something Wang accomplishes without falling into excessive sentimentality or caricature. I’m not usually a big reader of historical fiction, but this book’s cross-genre appeal warrants the start of a new section in our store: ‘Historical Fiction For Those Who Don’t Usually Read Historical Fiction.’”
— Josh Niesse, Underground Books, Carrollton, GA
View the List


Praise For The Hidden Light of Northern Fires: A Novel…

“Daren Wang’s first novel is splendid—a distinctive clear-eyed perspective on a fresh corner of the Civil War. The characters are fully alive, wonderfully varied, and the narrative voice is particularly lucid, in sharp contrast with the raving bloody madness of that dark moment in American history.”
—Charles Frazier, New York Times bestselling author of Cold Mountain, winner of the 1997 National Book Award

“In this fine novel, Daren Wang compellingly depicts the darkness of our country's greatest era of strife, but he also finds courage and love. The Hidden Light of Northern Fires is a wise and timely book."
-- Ron Rash, New York Times bestselling author of Serena and Above the Waterfall

"It is rare day when I thank an author for giving me a chance to read his book for a blurb. Daren Wang's The Hidden Light of Northern Fires is such a book for it turns out, he is such an author. He captured the feel, passion and struggle of a host of characters, both good and bad, living in a time I felt I understand. The language, even the cadence of those words, is spot on. It is a powerful book, a worthy story.” —Robert Hicks, author of The Widow of the South and The Orphan Mother

“Like Robert Penn Warren who turned again and again to history as a subject for his fiction and poetry, Wang examines not only the facts of the past but also creates a utterly believable possible past—one based on considerable research but only brought to vivid life through the lens of imagination. The Hidden Light of Northern Fires is a powerful and important novel about a lost piece of American history.”
—Natasha Trethewey, United States Poet Laureate, 2012-2014, author of Native Guard, winner of the 2007 Pulitzer Prize

"The Hidden Light of Northern Fires brings a little-known piece of the Civil War to vivid life, enriching readers with its clear-eyed understanding of both history and human nature. Deeply imagined and gorgeously written, the novel’s beating heart is Mary Willis, brave, fallible and wholly a product of her time. Wang’s debut will stay with you long after you turn the final page, and it’s perfect for book clubs; you’re going to want to talk about this one." —Sara Gruen, New York Times bestselling author of Water for Elephants and At the Water's Edge

"The Hidden Light of Northern Fires is so self-assured I’m shocked it’s a debut. Wang’s absorbing and ambitious first novel brings our history to vivid life in scenes that are by turns brutal and breathtakingly lovely. I will carry this story of love and vengeance, ruin and restoration with me for a long, long time. Read it--you will want to pass it on."
--Joshilyn Jackson, New York Times bestselling author of gods in Alabama

"An instant classic, The Hidden Light of Northern Fires announces the arrival of a major talent, fully matured."
--Da Chen, New York Times bestselling author of Colors of the Mountain

"Mary Willis makes Scarlett O’Hara look like a whiney brat. Sure, The Hidden Light of Northern Fires brings to life an astounding lost story of the Civil War, but is also a stay-up-all-night, read-it-in-one-sitting novel that looses the corseted ladies of the era onto the real world."
—Karen Abbott, New York Times bestselling author of Sin in the Second City, American Rose, and Liar,Temptress, Soldier, Spy


“The Hidden Light of Northern Fires pulses with visceral emotion, a story where one has the equal and opposite need to quickly turn the page and yet also linger over the palpably beautiful language. A powerful and life-affirming story that asks the important question - are we meant to be free, and if so how? From the intrigue on page one, we are immersed in a world that is in the past, but never gone. With a forbidden love story weaving in and out of the pages, Daren Wang has crafted a novel that will linger in the heart long after its last page.”
—Patti Callahan Henry, New York Times bestselling author of The Idea of Love and The Bookshop at Water's End

“One true sign of a born novelist is the ability to crawl inside characters who come from a world far from the writer's own time and personal experience. In his ambitious first novel, Daren Wang has done this spectacularly well. The people of his story come alive through the music of their words. This is a vivid study of a corner of Civil War America that feels fresh and unexplored. Like all the best historical fiction, The Hidden Light of Northern Fires opens a window into the present by exploring the past.”
– Mark Childress, author of Crazy in Alabama and Georgia Bottoms

"In Daren Wang’s capable hands, the bloody history of America’s civil war unfolds on the Union side of the Mason-Dixon line, where it turns out to be as heartbreaking and horrifying as it was everywhere else. In Town Line, NY, a hamlet that voted to secede from the Union and declare itself an independent state, the conflict is rendered in microcosm as siblings and friends take up arms against each other. The little-known history that informs The Hidden Light of Northern Fires is nearly as interesting as the vividly portrayed characters who struggle to find the right course of action or to redeem themselves from terrible mistakes. Wang’s engaging novel is a timely reminder of what can happen to a people when human rights are denied and the civil fabric of a nation is torn to pieces."
—Ed Falco, author of the New York Times bestseller, The Family Corleone

"A moving tale of loyalty and betrayal, violence and retribution, lofty ideals and harsh reality. Daren Wang has shined a light on a hidden corner of a story you thought you knew, revealing a divided America that, like our own, is both strange and true."
--Thomas Mullen, author of Darktown and The Last Town on Earth, winner of the James Fenimore Cooper Prize for excellence in historical fiction

“Daren Wang’s luminous first novel, The Hidden Light of Northern Fires, plumbs a national paradox in miniature: Town Line, New York, the only town north of the Mason-Dixon Line to secede from the union. At the center of an impressive array of characters—runaway slaves, confederate agents, vagabonds—is the strong-willed abolitionist Mary Willis, whose difficult family life and tragic love story are the beating heart of this important book: an original take on the mysteries of war that continues to define our nation.”
—Mark Winegardner, author of Crooked River Burning

“From the very first sentence of The Hidden Light of Northern Fires, you know you are in the hands of a masterful storyteller, one who reveals truths, hardships, nuances, and complexities with the eye of an artist. Though set in the past, this is a new story, an important story, one we all need to read. Daren Wang’s first novel is a marvel, and I hope he writes many, many more.”
—Connie May Fowler, author of Before Women had Wings and A Million Fragile Bones

“By unearthing a little known piece of history -- that a town in western New York voted to secede from the Union at the start of the Civil War -- and then applying his fierce imagination to this real-life discovery, Daren Wang transports us into a gripping and complex world of sibling rivalry, forbidden love, breathtaking cruelty, moral clarity, and hard-earned redemption. This excellent and timely novel asks of its characters the same galvanizing question we find ourselves facing today: Which side are you on?”
--Susan Rebecca White, author of A Place at the Table

"On a large canvas, Daren Wang has given us a portrait of the nation in a time of crisis and war. Peopled by slaves, owners, copperheads, spies, fathers and their sons, daughters and theirs lovers, The Hidden Light of Northern Fires is an at times rip-roarin’, at times tender meditation on the American Civil War and its furious discontents. With a graceful style and a compelling narrative pace, Wang brings to life a cast of characters who seem surprisingly contemporary. A fine debut." —Joseph Skibell, author of A Blessing on the Moon and A Curable Romantic

"Daren Wang’s engrossing first novel is passionate and brave. The Hidden Light of Northern Fires is a richly detailed, genre-changing novel that unearths a fascinating drama that history forgot. It wonderfully subverts the myths that still cling to a time in American history we all believe we understand but don’t." —Jonathan Odell, author of The Healing and Miss Hazel and the Rosa Parks League

DAREN WANG is the Executive Director of the Atlanta Journal-Constitution Decatur Book Festival, the largest independent book festival in the country. Before launching the festival, he had a twenty-year career in public radio, both national and local, with a particular focus on books and authors. Wang has written for the Atlanta Journal-Constitution, Paste magazine, and Five Points magazine, among others. The Hidden Light of Northern Fires is his first novel.
Loading...
or
Not Currently Available for Direct Purchase