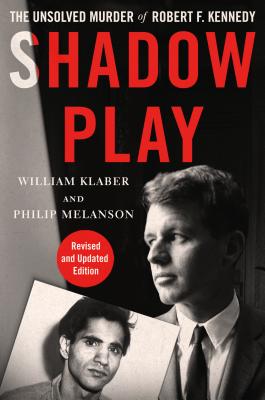 This updated edition for the 50th anniversary of Robert F. Kennedy’s murder explores ignored witness accounts, coerced testimony, bullet-hole evidence, and other issues surrounding the political homicide, and is the basis for the new podcast, The RFK Tapes, which debuted at #1 on the iTunes chart, available now.

On June 4, 1968, just after he had declared victory in the California presidential primary, Robert F. Kennedy was gunned down in the kitchen of the Ambassador Hotel. Captured a few feet away, gun in hand, was a young Palestinian-American named Sirhan Sirhan. The case against Sirhan was declared “open and shut” and the court proceedings against him were billed as “the trial of the century”; American justice at its fairest and most sure. But was it? By careful examination of the police files, hidden for twenty years, William Klaber and Philip Melanson's Shadow Play explores the chilling significance of altered evidence, ignored witnesses, and coerced testimony. It challenges the official assumptions and conclusions about this most troubling, and perhaps still unsolved, political murder.

"An eye-opening review of the evidentiary discrepancies that are possible in a celebrated criminal case." - Kirkus

"A gripping and insightful account of the RFK assassination and the Sirhan trial. This tragedy is an enigma far different from the simple shooting that we have always been asked to accept." - Dr. Cyril H. Wecht, former president of the American Academy of Forensic Sciences

Philip Melanson was a political science professor and the chair of the Robert Kennedy Assassination Archives at University of Massachusetts, Dartmouth. He died in 2006.
Loading...
or
Not Currently Available for Direct Purchase