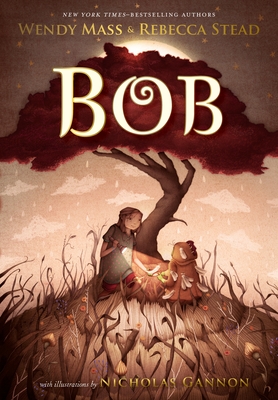 It’s been five years since Livy and her family have visited Livy’s grandmother in Australia. Now that she’s back, Livy has the feeling she’s forgotten something really, really important about Gran’s house.

It turns out she’s right.

Bob, a short, greenish creature dressed in a chicken suit, didn’t forget Livy, or her promise. He’s been waiting five years for her to come back, hiding in a closet like she told him to. He can’t remember who—or what—he is, where he came from, or if he even has a family. But five years ago Livy promised she would help him find his way back home. Now it’s time to keep that promise.

"A delightfully whimsical tale that begs to be read with a friend. Don't miss Bob." —The Christian Science Monitor

"This is a welcome addition to the middle-grade canon and will likely become a classic. Bob deserves readership beyond middle grade."--San Francisco Book Review

A Chicago Tribute Best Children's Book of the Year

"Authors Mass and Stead team up for this irresistible tale of magic, mystery, and friendship that poses timeless questions about identity and belonging...a tribute to the power of storytelling.."--Publishers Weekly, starred review

"An unusual fantasy with simplicity, immediacy, and wit."--Booklist, starred review

"Five years ago, Livy left her friend Bob, who she describes as a zombielike creature, in the closet of her grandmother’s house in Australia without saying goodbye. Bob has loyally awaited Livy’s return, dressed in the chicken suit she made to disguise him, and hopeful about the promise she made to help him find his way home, wherever that may be. ... A perfectly paced plot, supported by secondary characters to whom readers will relate and luminous artwork by Gannon, fill out a story that readers will eagerly embrace."--School Library Journal, starred review

"Offer[s] just the right blend of mystery and cozy magic in a rewarding story about how friendships—and people—evolve over time."--Bookpage

"Perfect for a family read-aloud, this has short chapters, occasional illustrations and a heartwarming conclusion."--Providence Journal

Rebecca Stead is the New York Times-bestselling author of When You Reach Me, winner of the Newbery Medal; Liar & Spy; FirstLight; and Goodbye Stranger. Her work has been also been awarded the Boston Globe/Horn Book Award for Fiction and the Guardian Children’s Fiction Award. She lives in New York City with her family and their lazy but beautiful cat.