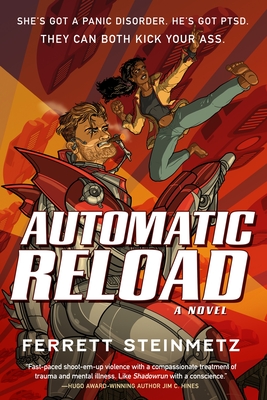 Meet Mat, a tortured mercenary who has become the perfect shot, and Silvia, an idealistic woman genetically engineered to murder you to death.

Together they run for the shadiest corporation in the world...and realize their messed-up brain chemistry cannot overpower their very real chemistry.

Automatic Reload is the genre's most unexpectedly heartfelt romantic comedy with explosions, perfect for fans of both Altered Carbon and Atomic Blonde.

“LUXURIATES in the intricate beauty that is technology, exults in the mechanics of cyberpunk. And it does all this while being a ROM-COM with a lot of EXPLOSIONS.”—Cassandra Khaw, finalist for the British Fantasy and Locus Awards for Hammers on Bone


Praise For Automatic Reload: A Novel…

“Automatic Reload is an adrenaline-fueled cyborg rampage wrapped around a creamy sweet center. With a heart-stopping pace, tender interludes, and rich technical details, Ferrett Steinmetz has crafted a story that cranks itself to eleven. You'd better have your seat belt on, because this book barrels through tight corners and hairpin turns, all the way to its unexpected finish line.” —S. B. Divya, Nebula Award nominated author of Runtime and co-editor of Hugo-nominated Escape Pod

“Brutally weird and terrifyingly believable, Ferret Steinmetz takes the gloves off and punches you repeatedly in the brain with a high-tech look at a fatal future. Automatic Reload is what happens when humanity's lines are crossed. We'll never be able to go back.”— K. C. Alexander, author of Necrotech and Mass Effect: Nexus Uprising

“A wicked technothriller full of gut-punching action, sharp twists, and surprisingly tender moments. Also, the most heart-pounding cyborg tech support you will ever read.” – Spencer Ellsworth, author of The Starfire Trilogy

“Automatic Reload is a wild ride through an all-too-believable, terminally capitalist future. I came for the shoot-em-up action, but the relationships in this book have more punch than the most well-tuned gun. I was cheering for Silvia and Mat all the way through.” —Alex Wells, author of Hunger Makes the Wolf

“Frederick Pohl said good science fiction shouldn’t just predict the automobile, but also the traffic jam. Automatic Reload does that for body-modification, AI, and computer-aided combat. We get the traffic jam, plus road rage, hyper-surveillance, and hails of bullets...but we also get the fragile people trying to survive it all. I hope it isn’t prophetic, but I’m afraid it might be. ” —James Alan Gardner, author of They Promised Me the Gun Wasn’t Loaded

“Steinmetz delivers a 'rom-com with explosions' featuring a hero with PTSD and control issues, and a killer heroine with a panic disorder. The action is nonstop, with issues of mental illness, identity, and humanity woven subtly throughout. Mat breaks the fourth wall in his random musings, rather like a cyborg Deadpool.”— Library Journal, starred review

“The discussion around this novel implies that it’s a revelous romp, but that would be oversimplifying it. Yes, the characters are fun and mad, the descriptions of the restaurant and its inhabitants wondrous and sparkling. But like the food sumptuously described here, strange, surprising and satisfying notes burst through while consuming each chapter.” — The Washington Post

FERRETT STEINMETZ is a graduate of both the Clarion Writers' Workshop and Viable Paradise. He was nominated for the Nebula Award in 2012 for his novelette Sauerkraut Station, and for the Compton Crook Award in 2015. He is the author of The Sol Majestic for Tor Books, as well as the 'Mancer trilogy and The Uploaded. He has written for Asimov's Science Fiction, Beneath Ceaseless Skies, Shimmer, and Andromeda Spaceways Inflight Magazine. Ferret lives in Cleveland with his very clever wife, a small black dog of indeterminate origin, and a friendly ghost.
Loading...
or support indie stores by buying on