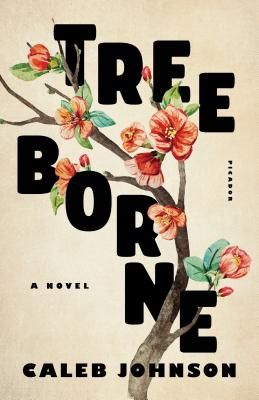 An Honorable Mention for the Southern Book Prize

Janie Treeborne lives on an orchard at the edge of Elberta, Alabama, and in time, she has become its keeper. A place where conquistadors once walked, and where the peaches they left behind now grow, Elberta has seen fierce battles, violent storms, and frantic change—and when the town is once again threatened from without, Janie realizes it won’t withstand much more. So she tells the story of its people: of Hugh, her granddaddy, determined to preserve Elberta’s legacy at any cost; of his wife, Maybelle, the postmaster, whose sudden death throws the town into chaos; of her lover, Lee Malone, a black orchardist harvesting from a land where he is less than welcome; of the time when Janie kidnapped her own Hollywood-obsessed aunt and tore the wrong people apart.

As the world closes in on Elberta, Caleb Johnson’s debut novel lifts the veil and offers one last glimpse. Treeborne is a celebration and a reminder: of how the past gets mixed up in thoughts of the future; of how home is a story as much as a place.


Praise For Treeborne: A Novel…

"If Daniel Wallace says he wishes he’d written it, then we want to read it."—Deep South magazine (Summer Reading List)

"A story about complicated legacies and the people who bring to life the places we call home."—Southern Living (Best New Books Coming Out This Summer)

"In his debut novel, Johnson has conjured a stunning account of the Treeborne family of Elberta, Alabama, creating an immersive sense of both time and place as he probes the memories and resentments that linger among the town's residents over the course of decades...Majestic in scope, jam-packed with revelations and a touch of the fantastical, Treeborne is an enthralling story about what binds people together and breaks them apart."—Booklist (Starred Review)

"Superb...It isn't a coincidence the Treebornes' town shares a person's name; the whole place is as alive as if it walked on two feet. Sentence by loamy sentence, this gifted author digs up corpses and upends trees to create a place laden with magic and memory."—Publishers Weekly (Starred Review)

"Johnson's gem of a novel tells of a place and its people so vivid and real that readers won't want their stories to end."—Library Journal (Starred Review)

"I can’t remember the last time I read a book I wish so much I’d written. Treeborne is beautiful, and mythic in ways I would never have been able to imagine...It reminds me of one of my favorite books, Light in August. The language is so fresh and real, and the characters are as well. I can’t say enough about this book."—Daniel Wallace, author of Extraordinary Adventures and Big Fish: A Novel of Mythic Proportions

"In Treeborne, Caleb Johnson spins an artful, intricate web of a place—its rich history and memorable characters caught and held there by stories told and secrets withheld. Suspenseful and immensely satisfying."—Jill McCorkle, author of Life After Life

"Treeborne is a remarkable first novel: poetic, funny, and populated by particular, fully alive characters. Caleb Johnson has a wonderful ear for the rhythm and diction of Southern voices. He knows how to light on just the right detail of place, time and person. Watching how the intertwined interests of the land, of the past, and of a family play out makes the novel compelling from start to finish."—Dana Spiotta, author of Innocents and Others and Stone Arabia

"You’re going to want [Treeborne] on your bookshelf for a long time...The real pleasure here is the way in which the book immerses you into this place and with this eccentric cast of Southern characters...as if these vivid stories are being passed down directly to [the reader]."—Bookreporter.com

"[Treeborne] is deeply rooted in the Southern literature tradition, peopled with eccentric characters and spiked with a dash of the gothic...In vivid and often lyrical language, [Johnson] affirms that, for some, geography and destiny are inevitably joined."—Asheville Citizen-Times

"A summer novel that deserves a spot on every Southerner’s shelf."—Augusta Chronicle

"[A] fascinating debut novel...Read this book carefully or else you will miss [the] important parts."—The Pilot (Southern Pines)

"Caleb Johnson's writing makes you yearn for a place that never was. Elberta, Alabama is so vivid, so alive, you can smell the peaches ripening in the orchard."—Daren Wang, author of The Hidden Light of Northern Fires

"Every now and again a powerful new voice bursts into song and begins to sing stories we can’t do without. Caleb Johnson's is such a voice. The characters and desires of Treeborne will wrap themselves around you tighter than any wild vine. And the setting of Elberta, Alabama will call out to you like a long-lost home. This novel is a gripping, entrancing debut by one whirlwind of a writer."—Alyson Hagy, author of Scribe and Boleto

"What a marvel of a novel this is. Treeborne’s sentences are taut, its situations engrossing, its characters absolutely and indelibly engaging. Caleb Johnson’s debut is a deep-dig, history-rich, story-soaked beauty."—Laird Hunt, author of Neverhome

“Caleb Johnson is as much a prophet of his place and time as was Larry Brown of north Mississippi, as Cormac McCarthy of his native Knoxville, Tennessee, Marquez of his homegrown, fictional Macondo. He is ‘Treeborne.’ This is a novel born of a deep, affectionate, and wise knowledge of a place and its people, its history, and its rich and complicated wildness. And its innate tendency to recognize and heighten the mysterious and strange in the ordinary, everyday. He manipulates and maneuvers narrative masterfully.”—Brad Watson, author of Miss Jane

“This boy cannot only write with beauty about how things are in the Deep South, he can write with an eerie feel for the way they used to be. I’ve heard a lot of great old editors say that you can’t teach writing, that it’s born. Caleb Johnson can make you believe it.”—Rick Bragg, author of My Southern Journey and All Over but the Shoutin'

CALEB JOHNSON is the author of the novel Treeborne. He grew up in Arley, AL, studied journalism at The University of Alabama in Tuscaloosa and earned an MFA from the University of Wyoming. Johnson has worked as a newspaper reporter, a janitor and a whole-animal butcher, among other jobs. He has been awarded a Jentel Writing Residency and a Walter E. Dakin Fellowship in fiction to the Sewanee Writers' Conference. He lives with his wife, Irina, and their dog, Hugo, in Valle Crucis, NC, where he teaches at Appalachian State University while working on his next novel.
Loading...
or
Not Currently Available for Direct Purchase