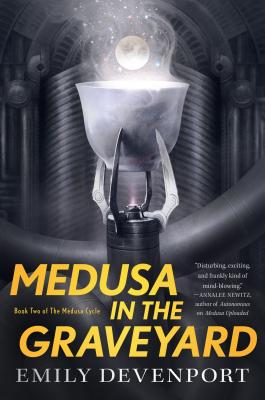 Medusa in the Graveyard

Book Two of the Medusa Cycle

Medusa in the Graveyard is the action-packed, science fiction sequel to Emily Devenport's Medusa Uploaded.

Oichi Angelis, former Worm, along with her fellow insurgents on the generation starship Olympia, head deeper into the Charon System for the planet called Graveyard.

Ancient, sentient, alien starships wait for them—three colossi so powerful they remain aware even in self-imposed sleep. The race that made the Three are dead, but Oichi's people were engineered with this ancient DNA.

A delegation from Olympia must journey to the heart of Graveyard and be judged by the Three. Before they're done, they will discover that weapons are the least of what the ships have to offer.


Praise For Medusa in the Graveyard: Book Two of the Medusa Cycle…

“The first book in the Medusa Cycle does not disappoint.”—RT Book Reviews (4 stars)

“A chilling tale of class warfare in deep space."—Booklist

“An enticing start to a new space opera . . . will capture readers.”—Library Journal

“The worlds . . . both physical and virtual, are richly detailed and gorgeously imagined.”—Kirkus

“Fascinating courtly intrigue and bloody power games set on a generation ship full of secrets—Medusa Uploaded is an imaginative, intense mystery about family dramas and ancient technologies whose influence reverberates across the stars. Disturbing, exciting, and frankly kind of mind-blowing.”—Annalee Newitz, author of Autonomous

EMILY DEVENPORT has written several novels under various pseudonyms including one which was a finalist for the Philip K. Dick award. She is currently studies Geology and works as a volunteer at the Desert Botanical Garden in Phoenix. Emily is the author of Medusa Uploaded.
Loading...
or support indie stores by buying on