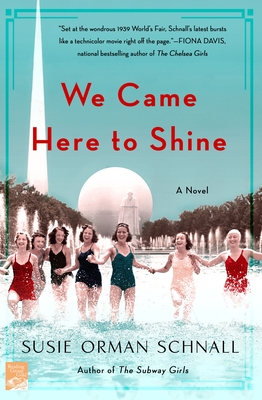 We Came Here to Shine (Paperback)

At the iconic 1939 New York World’s Fair, two ambitious young women—a down-on-her-luck actress and an aspiring journalist—form an unlikely friendship as they navigate a world of possibility and find out what they are truly made of during a glorious summer of spectacle and potential…

“An ode to female friendship that pulses with momentum and left me breathless.” —Fiona Davis, national bestselling author of The Chelsea Girls

“A remarkable novel about the challenges women face and the courage they must summon in order to lead the lives they deserve." —Lynda Cohen Loigman, author of The Two-Family House

Gorgeous Vivi is about to begin filming her first starring role in a Hollywood picture when the studio head ships her off to New York as a favor to a friend. She’s assigned the leading role in the heralded Aquacade synchronized swimming spectacular at the World’s Fair, a fate she believes will destroy her film career. If she performs well, she’ll have another chance at stardom, but with everything working against her, will her summer lead to opportunity or failure?

Plucky Max dreams of becoming a serious journalist, but when her job at the New York Times doesn’t pan out, she finds herself begrudgingly working for the daily paper of the World’s Fair. As her ideas are continually overlooked by her male counterparts and her career prospects are put in jeopardy, Max must risk everything to change the course of her life.

When Max and Vivi’s worlds collide, they forge an enduring friendship. One that teaches them to go after what matters most during the most meaningful summer of their lives.

Susie Orman Schnall grew up in Los Angeles and graduated from the University of Pennsylvania. Her writing has appeared in publications including The New York Times, The Huffington Post, POPSUGAR, Writer’s Digest, and Glamour. She is also the author of the award-winning novels On Grace and The Balance Project. Susie has spoken extensively on work-life balance and is the founder of The Balance Project interview series. She lives in Purchase, NY, with her husband and their three sons.

Praise For We Came Here to Shine: A Novel…

"On the thrilling backdrop of the 1939 World’s Fair, Schnall once again delivers a story both captivating and timely, as two women must struggle to make their way in a male-dominated world in this beautiful novel of friendship and ambition." - Jennifer S. Brown, bestselling author of Modern Girls

“At its heart, WE CAME HERE TO SHINE pulses with tenacity, ambition, and friendship as two enterprising women find their paths to the future through the power of sisterhood. This wonderful story glows with colorful historical details and delivers a behind-the-scenes ticket to the wonders and woes of New York’s 1939 World’s Fair.” - Elise Hooper, author of Fast Girls, The Other Alcott, and Learning to See

“Set at the wondrous 1939 World’s Fair, Orman Schnall’s latest bursts like a technicolor movie right off the page, as her two heroines battle for their rights in what’s very much a man’s world, forging a remarkable bond in the process. An ode to female friendship that pulses with momentum and left me breathless.”
--Fiona Davis, national bestselling author of The Chelsea Girls

“We Came Here to Shine is an exceptional work of historical fiction, illuminating the challenges of women in a world that wants to control them. There are conflicts and challenges at every turn, leaving the reader wondering how the characters can emerge from it all. Yet the skillful storytelling of Schnall succeeds at creating an ending that is both surprising and believable. Pick this one up if you enjoy books with friendship, love, struggle, triumph, and a bit of Hollywood in New York.” – Camille Di Maio, Bestselling author of The Memory of Us

"We Came Here to Shine is a perfectly crafted and dynamic tale of female ambition, professional rivalry, and family secrets, all set against the sensational backdrop of the 1939 New York World’s Fair. An unlikely friendship between a struggling Hollywood starlet and a budding female journalist becomes the extraordinary centerpiece of this beautifully-told story, which reveals not only the glamorous and optimistic side of the Fair, but the sordid reality of what goes on behind the scenes. With masterful attention to historical detail, Susie Orman Schnall has gifted us with a remarkable novel about the challenges women face and the courage they must summon in order to lead the lives they deserve." - Lynda Cohen Loigman, author of The Two-Family House