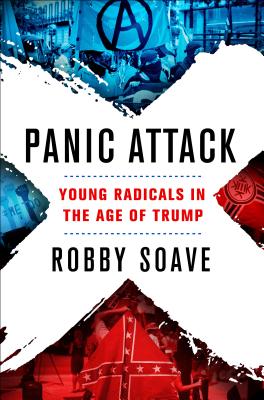 Young Radicals in the Age of Trump

Since the 2016 election, college campuses have erupted in violent protests, demands for safe spaces, and the silencing of views that activist groups find disagreeable. Who are the leaders behind these protests, and what do they want? In Panic Attack, libertarian journalist Robby Soave answers these questions by profiling young radicals from across the political spectrum.

Millennial activism has risen to new heights in the age of Trump. Although Soave may not personally agree with their motivations and goals, he takes their ideas seriously, approaching his interviews with a mixture of respect and healthy skepticism. The result is a faithful cross-section of today's radical youth, which will appeal to libertarians, conservatives, centrist liberals, and anyone who is alarmed by the trampling of free speech and due process in the name of social justice.

ROBBY SOAVE is an associate editor at Reason.com. His commentary on Rolling Stone's reporting on sexual assault at the University of Virginia won him a 2015 Southern California Journalism Award. A columnist for The Daily Beast, his writing has appeared in The New York Times, New York Post, CNN, USA Today, and Newsweek. He was named in Forbes' 2016 "30 Under 30" list for law and policy. He is a regular guest on Fox News, CNN, and syndicated radio programs.

Praise For Panic Attack: Young Radicals in the Age of Trump…

“The Bill of Rights has no greater defender than Robby Soave. He’s also a terrific reporter and a talented stylist. He’s written the comprehensive guide to what’s happening to millennial America. Read this book if you want to understand what the stakes are.” —Tucker Carlson, host of Tucker Carlson Tonight

“Robby Soave reports the truth, even when it makes people uncomfortable. This book shines a bright light on the thought-crushing insanity that has taken hold among young Americans and at some of our most important institutions. Soave tells a stunning story of the assault on free speech, one that should concern us all.” —Meghan McCain, co-host of The View

"Panic Attack is a methodical, earnest and often insightful work of reporting and analysis.” —The Guardian

"A comprehensive and critical look at the flourishing ecosystem of American radicalism." —Washington Monthly