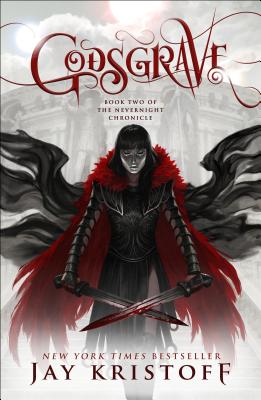 Mia Corvere has found her place among the Blades of Our Lady of Blessed Murder, but many in the Red Church hierarchy think shes far from earned it. Plying her bloody trade in a backwater of the Republic, shes no closer to ending the men who destroyed her familia; in fact, shes told directly that Consul Scaeva is off limits. But after a deadly confrontation with an old enemy, Mia's suspicions about the Red Churchs true motives begin to grow.

When its announced that Scaeva will be making a rare public appearance at the conclusion of the grand games in Godsgrave, Mia defies the Church and sells herself to a gladiatorial collegium for a chance to finally end him. Upon the sands of the arena, Mia finds new allies, bitter rivals, and more questions about her strange affinity for the shadows. But as conspiracies unfold within the collegium walls, and the body count rises, Mia will be forced to choose between love and revenge, and uncover a secret that could change the very face of her world.

"Kristoff again graces his story with hilarious asides, vicious competition, and a protagonist as relentless as she is fearless. Her brutal world is populated with a fascinating array of characters who often meet dismal and bloody fates.... Through tragedy, betrayal, and victory, this glorious adventure thrills and satisfies with cold violence, terrifying monsters, roaring crowds, and bloody honor." Publishers Weekly (starred review)

"Sexier, grittier, fiercer, bloodier Jay Kristoffs Godsgrave is an action-packed showstopper. ... Godsgrave thrums with unrelenting tension and suspense and you wont know what to do with yourself once its over." USA Today

"I feel like I really can't do this book justice with words. But it is in fact bloodier, sexier, stabbier and badassier (just go with it) than Nevernight. Seriously, who knew that was even possible? Questions are answered, many more are asked and we are slowly fed more information about Mia's past." The YA Circle blog on Godsgrave

"Kristoff has put together an excellent follow-up to Nevernight, and it will not disappoint....Things get more and more intense in just about every area of Mia's life, and it's all leading to a showstopping conclusion in book three. I'll be waiting for it!" The Eater of Books blog on Godsgrave

"Godsgrave is intense and dark... Theres a lot of dynamic and strong characters especially the women. The last 80 pages will leave you shouting your head off and its never info dumped or out of left field.... If you like YA fantasy but want more sex and blood and language, read Nevernight and then quickly follow it with Godsgrave..." Bang Bang Books blog on Godsgrave

"All I can say is "Wow!" I'm speechless with wonder, with awe at the twists and turns the story had taken. Though I'm expecting things not to go swimmingly for Mia, I never imagined the routes the plot would take to bring her to where she was by the end of the book." The Romance Reviews blog

"I rate this book a glowing 5 out of 5 stars! Perfect for fantasy readers who love a badass heroine, assassins, action, and blood!" The Introverted Book Nerd blog

"Come for the vengeful assassins, stay for the fear-drinking shadowcats. Godsgrave is a stylish, fast-paced and welcome return to the world of Nevernight." Peter Newman, award-winning author of The Vagrant

"Launching the Nevernight fantasy series, Kristoff (the Lotus War trilogy) creates a splendid world of corruption and violence. Kristoff portrays a world as rife with villains and treachery as the ancient Italian civilizations it echoes. Absorbing in its complexity and bold in its bloodiness, this beginning promises (and delivers) equal shares of beauty and decay."Publishers Weekly, starred review on Nevernight

"A sensuous, shades-of-moral-gray world; a compelling, passionate heroine; a high-stakes quest for revengethis is a fantasy fans won't be able to put down."Kirkus Reviews on Nevernight

"The world-building is delightfully detailed, its baroque flourishes supplied by sarcastic footnotes, but we are drawn through the narrative by Mias triple quest: to rescue her family members, to avenge her fathers death and to survive her education at the church, where the ultimate test is to avoid being killed by the training."The Daily Mail on Nevernight

"Kristoff's new fantasy series is off to a rollicking start."Booklist on Nevernight

"A very entertaining and well thought out story with a very readable main protagonist and her sidekick set at its heart.... Its dark and twisted with a great streak of humour that softens some of the blows. An excellent start to series and one that Im really looking forward to continuing with." The Speculative Herald blog on Nevernight

JAY KRISTOFF is the New York Times and internationally bestselling author of The Lotus War, The Illuminae Files and The Nevernight Chronicle. He is the winner of four Aurealis Awards, an ABIA, a nominee for the Locus award, a nominee for the David Gemmell Morningstar and Legend awards, named multiple times in the Kirkus and Amazon Best Teen Books list and published in over thirty countries, most of which he has never visited. He is as surprised about all of this as you are. He is 67 and has approximately 12,015 days to live. He abides in Melbourne with his secret agent kung-fu assassin wife, and the worlds laziest Jack Russell. He does not believe in happy endings.
Loading...
or support indie stores by buying on